Can RegTech solve the Technology needs of the post-Covid Trading Floor? 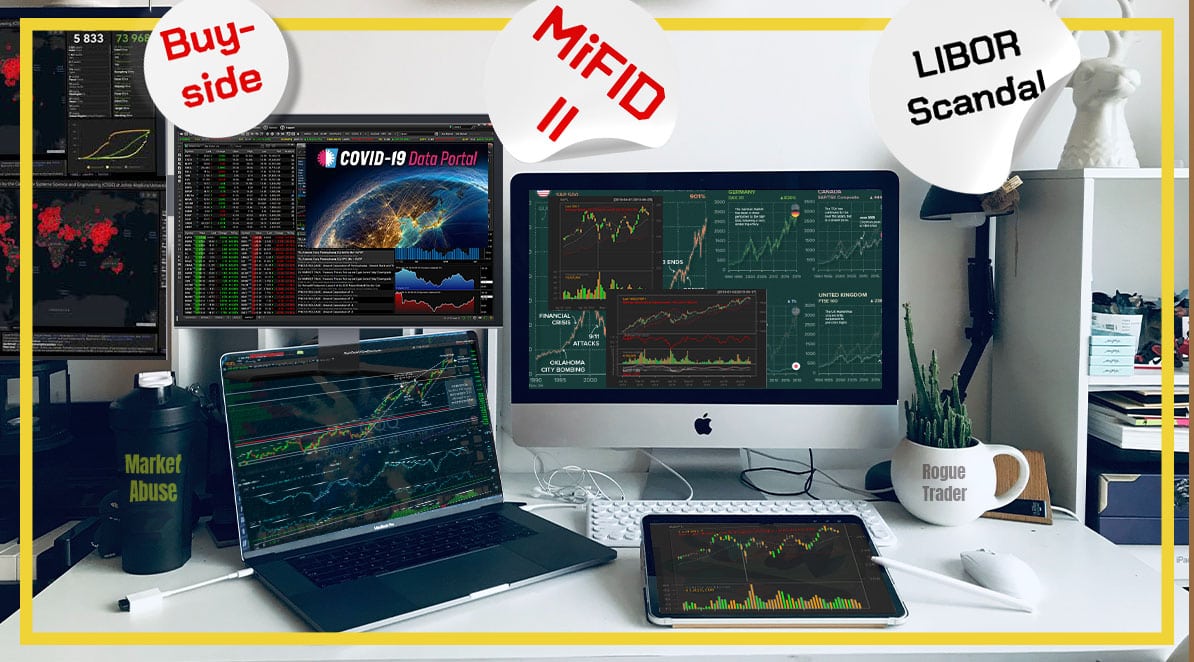 Or will we see “SurveilTech” emerge?

Everyone has experienced working from home in financial institutions so far this year. For some of us, working from home has been easier than for others. Put the kettle on, turn Skype on, get warmed up for the day ahead, maybe check the current daily infection rates on the News. This might be changing soon.

When it comes to the new reality for traders, who almost never worked from home in the past, talk is increasing about how their families and co-habitants may need to disclose their details, if they haven’t already had to submit this information.

This would be in relation to a ‘Work Station Assessment’ that would need to be carried out to ensure the working from home environment is compliant. It precludes in their case that they sit in a secure room locked away from the rest of the world, with limited contact with anybody outside of work during work hours.

Sounds like a dream lockdown job doesn’t it? Almost like a 5 days a week, 8am – 8pm quarantine with video surveillance thrown in. This has probably been going on in the case of many tens of thousands of traders all around the world since the lockdown started. And Big Brother is very much involved:

Could be worse… Might have got a message like this when you woke up in the morning a few weeks ago:

Fortunately, for now, the EU, the UK and the US haven’t been so strict on trading being allowed from home. ‘Authorized Home Access’ is a term that is becoming popular.

Things aren’t quite that Rosy though.

Back in October 2017 EY published a survey where they showed that “firms struggle to provide effective monitoring of all business lines and requirements”, specifically in the instance of trader surveillance. Market abuse was then and is now an area of concern for financial institutions.

The best hope, according to many, for tackling the problem of market abuse, is further investment into technology. Lots of different types of technology related to areas such as data validation, audit and purging of multiple data types. This data itself would be drawn from traders interactions with the Order Book, Market Data, Trade Data, Third-Party Data, Email, Chat and Voice.

All of which amounts to Surveillance and technologies that are able to provide the most satisfactory surveillance levels for the guidelines set out by the SEC, FCA and a whole host of other Regulators, Committees and Organizations across the world.

One doesn’t have to go far back to remember the fall-out from the LIBOR Scandal.

Seven men in total were convicted and the Serious Fraud Office in the UK was even involved. All of this because of the $450 trillion contracts and consumer loans that depended on the honesty of those agreeing the rates between them.

The men in question were all mainly sitting in their offices or on the trading floors. Granted, technology may not have been as good then, but it would still have been easier to monitor traders during the ‘00s than it is today, while they are all mainly working from home.

This might be good news for people like desk assistant, Jonathan Mathew, who might have been relieved to spend time away from his previous boss at Barclays, Peter Johnson. As it stands, Jonathan appears to have to have put up with years of alleged abuses by his boss, only to then end up with a prison sentence, mainly because he worked for this boss in the first place.

Were compliance departments across financial institutions ready for lockdown in March 2020?

COVID-19 and the Front Office

In March the FCA encouraged firms to continue to take all steps to prevent market abuse risks. This could include enhanced monitoring, or retrospective reviews.

By April it was clear that many Banks had started to take the FCA’s encouragement very seriously. Compliance teams were relied upon by financial institutions as a key line of defence against malpractice and keeping regulators at bay, now more than ever. EY, amongst others, started delegating compliance staff to banks across the world to help with the extra compliance pressure that comes with remote working.

A report by the team at Deloitte in Ireland (Deloitte Report) from June this year has a wonderful quote that summarizes all the complexities of allowing home working for traders:

“An equity trader throws client documents into a home office wastepaper basket, making a mental note to deal with its proper disposal later; a front-office salesperson unknowingly discusses confidential information in earshot of a roommate, who happens to work at a competing dealer; a bond trader working remotely leaves their computer unlocked and steps out to run an errand, and another house member quickly uses the computer to access the Internet, unaware that “hotkeys” are enabled, resulting in unintentional buying and selling of various securities; and a financial adviser, frustrated at being unable to dial into a recorded phone line, gives up and calls the client using his personal mobile phone.”

Following COVID-19 being declared a global pandemic and the closure of many offices, The FICC Markets Standards Board (FMSB) formed a working group of members and other interested market participants to consider the impacts of financial services activities being undertaken by a workforce which is widely distributed and using remote working.

The FMSB published a Spotlight Review which examined remote working risks in FICC markets at the end of July:

Martin Pluves, CEO of FMSB said: “The rapid transition to widespread and prolonged remote working presented significant new challenges for all participants in wholesale FICC markets. It would appear that remote working in one form or another is here to stay and each firm must navigate its own unique set of challenges. FMSB’s risk register, the product of a diverse group of practitioners, provides practical considerations to help firms with the task of identifying and mitigating risks during this ongoing period of significant change.”

And just a few weeks ago the SEC’s Office of Compliance Inspections and Examinations gave out a Risk Alert: Select COVID-19 Compliance Risks and Considerations for Broker-Dealers and Investment Advisers where the following points were highlighted: (SEC Risk Alert)

Just some of the areas that were raised as areas to address:

• Supervisors not having the same level of oversight and interaction with supervised persons when they are working remotely.

• Supervised persons making securities recommendations in market sectors that have experienced greater volatility or may have heightened risks for fraud.

• The impact of limited on-site due diligence reviews and other resource constraints associated with reviewing of third-party managers, investments, and portfolio holding companies.

• Communications or transactions occurring outside of the Firms’ systems due to personnel working from remote locations and using personal devices.

Some firms have already invested in this area to help appease the various reports and suggestions that are being revealed every few weeks. Some of the players in this sector are NICE Actimize, and Christopher Wooten, Executive Vice-President of NICE, shared some of his thoughts about this with #DisruptionBanking:

“The financial marketplace is one of the most highly regulated professions in the world.  To prevent malfeasance and maintain stability, regulatory bodies like the SEC, FCA and many others require firms to collect a staggering amount of data on every transaction that occurs – far more information than any human could review in a 100 lifetimes.  The technology which NICE Actimize creates allows financial institutions worldwide to make sense of all that data, and ensure the proper supervision of market participants.

“For the FCA, rules like SM&CR (Senior managers and certification regime) which are aimed at encouraging greater individual accountability and setting a new standard of personal conduct impacting broader parts of a firm. NICE Actimize has solutions that can help firms manage and understand where conduct risks exist within any part of an organization. Because of our scale and breadth of offering we have the unique ability to handle all of a firms’, regardless of size, surveillance needs, and also can support their data capture, and retention requirements which are required by regulators as well.“

Companies in the capital markets area are having more and more complex demands to suppliers, Christopher continued by sharing how NICE Actimize is able to fulfil these demands:

“Properly supervising a trading team is a difficult task under normal circumstances. Many legacy systems require users to be physically onsite and operate dreadfully slowly when accessed remotely through a VPN. The future of conduct surveillance resides on the cloud which eliminates this hurdle and allows for proper supervision from anywhere.  Most firms planned to make this transition in the next two to three years, but when the entire industry suddenly transitioned to a work from home environment that task became paramount.  As a result, the most complicated demand NICE Actimize has received is helping firms transition their supervision and suitability surveillance to the cloud in a matter of months as opposed to years.”

NICE Actimize deliver surveillance technology to many clients involved in trading, so we asked Christopher to comment on the rumours of increased surveillance amongst customers in this sector:

“Due to COVID we have seen a significant increase in interest in adapting and expanding surveillance over what we experienced pre-COVID. With employees shifting to remote work, there was increase in both the types of communications to be monitored and the types of behaviour that could raise concerns.

Christopher went on to summarize: “Clearly this reflects the investments that FIs are making now or will be making in the future.

“To truly manage conduct risk you have to monitor more employees, because that is in essence what you’re doing – monitoring for employee risk –  you can’t monitor some employees and not others, as you’re missing risks… So it’s not surprising that the industry views surveillance expanding its reach.

“Firms are slow to adopt broader surveillance coverage, partly because of the amount of data – it would be huge, resulting in lots of manual process, more people, higher costs, etc.….. However now with automation and advanced technology, that changes. What we’re seeing is an increased demand among our clients for applying machine leaning and anomaly detection to the use case of “behavioral analytics” detecting anomalous behavior in employees.

“The accuracy of the technology has come a long way recently, and it can be done with little human intervention. We’ve seen a pointed increase in interest in these solutions since March.“

The need for compliance officers to perform spot-checks at traders’ homes around London, Frankfurt, New York and other financial centres may be coming to an end with some of the solutions already out there. Will adaptation be cost-effective enough for firms to catch-up with regulation?

There may still be some who struggle, even with the huge increase in many share prices on the major indexes since May. 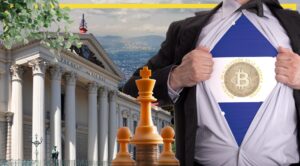