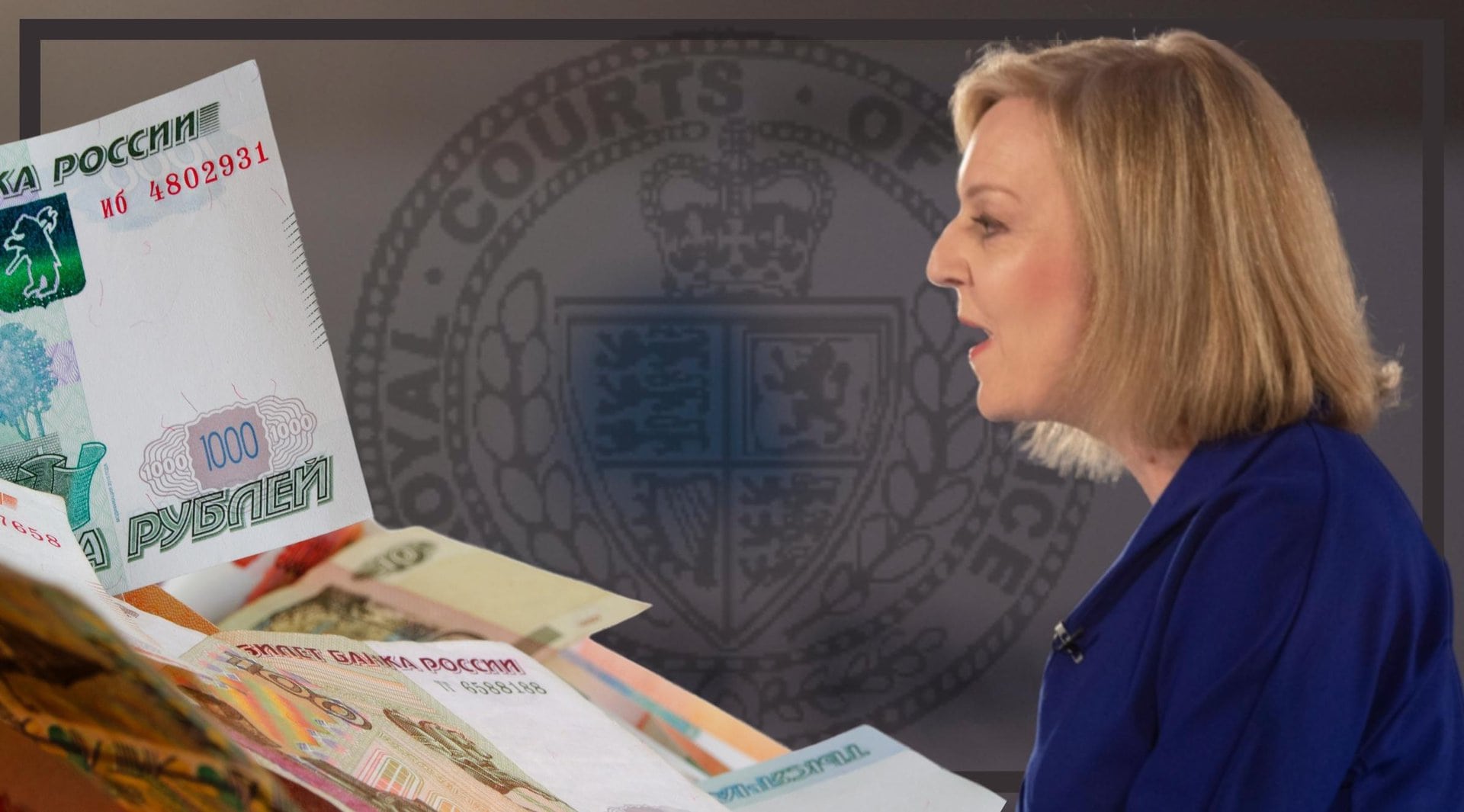 According to Portland, a communications firm, Russian claimants were second behind British citizens in commercial cases heard in UK courts. That is no surprise, as “Russian” cases have been on the rise in the UK since 2017, the same firm reports.

In light of recent sanctions imposed on oligarchs in the UK and their increased activity in the courts, one term comes to mind. LawFare.

LawFare refers to the use of legal systems and institutions to damage or delegitimise an opponent. In this context, it refers to the tactics used by legal firms hired by Russian oligarchs to intimidate, scare into silence, and sue individuals who are allegedly harming their businesses.

The most notable case is that of Roman Abramovich, a Russian oligarch with connections to Putin. As the Guardian reports, he had sued Catherine Belton over her book Putin’s People, in which she argued that he only purchased Chelsea Football Club because Putin demanded he did.

Belton’s case is not a one off. Many individuals who have spoken publicly about the oligarch’s connection to Putin and his authoritarian regime have been faced with lawsuits. Considering that the author was going against one of the richest people in Russia, as well as a man who had previously served in a governmental role under Putin, the outcome of the hearing was favourable. After the case was settled, both parties had to pay their own legal costs and no money was paid directly to the oligarch. The publishing house, HarperCollins, clarifies in the amended version of the book that Abramovich was not instructed by anyone as to the purchase of the football club.

Particularly in the aftermath of Putin’s invasion of Ukraine, 10 Downing Street has been very tough on those who still aid the Putin regime.

Liz Truss, during her time as Foreign Secretary, sent numerous letters to law firms representing the oligarchs, warning them that sanctions will be imposed on, in her words, all those who help Russian oligarchs.

Her fellow party member, Bob Seely appeared in the House of Commons to read out the names of “amoral” lawyers, which he called “Putin’s henchman.” Both Johnson and Truss have been very openly supporting Ukrainians through the war, and consistent in condemning Russia’s unprovoked attack.

The ruling party had been in unison about cracking down on Russian oligarchs, taking their real estate and other personal belongings from them, as well as freezing or confiscating their assets.

As an official governmental press release outlines, Liz Truss has said that “the blood of the Ukrainian people is on their [Russian oligarchs’] hands. They should hang their heads in shame.” The press release also states that “the UK will continue to lead global efforts to provide Ukraine with economic, diplomatic, humanitarian, and defensive support.” Through imposing sanctions on Russian oligarchs and their businesses, the UK is trying to ensure that Russia’s war assets and economy take a major hit, which would of course be of huge advantage to the Ukrainians.

There are seven men named as sanctioned oligarchs and there are two main features that characterise them. They have ties to Russian private or state-owned oil firms, or have worked for governmental agencies in the past.

Roman Abramovich previously owned a stake of 73% in Russian oil company Sibneft, which he sold to a state-owned firm, Gazprom, for just under £10 billion in 2005. Alexei Miller, who is the CEO of Gazprom, served under Putin in the 1990s when he was a deputy mayor of St. Petersburg. Another oligarch, Nikolai Tokarev, who is the Chairman of the state-owned pipeline company Transneft, served with Putin as a fellow KGB officer in the 1980s.

It’s not hard to see why the UK government has been tough on those individuals and has initiated such measures as the prohibition of any transaction with UK businesses and individuals, travel bans, and the freezing of all UK assets. As these are dangerous people closely connected with Putin’s regime, many argue they directly help Putin’s war in Ukraine and have been part of the authoritarian circle for over three decades.

In an interview with Catherine Nicholson, Truss spoke about the importance of aiding Ukrainians, “because it’s also about our own peace and security.” She also said that it’s vital for all allies to continue supplying Ukraine with weapons, as well as to “help Ukraine get their economy back and running,” enabling them to provide for themselves and help continue their war effort.

The oligarchs are much more than just extremely wealthy people gaining their riches through some murky schemes. They are part of a terrorist state that has blood of innocent people on their hands since the Russo-Georgian War in 2008, the Crimea invasion, and now the war in Ukraine. They aid a government that kills and jails all opposition voices advocating democracy.

With the war in Ukraine still ongoing, and most Western countries dedicated to helping either through the supply of weapons or the imposition of sanctions like the UK, we might ask whether enough has been done to fight Russia and aid Ukraine?

The Economic Crime (Transparency and Enforcement) Act 2022 sets out a test to establish beneficiary ownership of given overseas entities. This test suggests that anyone who holds more than 25% in shares, directly or indirectly, can be seen as an owner, as well as anyone who can exercise any influence over the appointment of the members of the board of directors or the entity itself. Furthermore, the Act requires the overseas entities to register with the Companies House register, unless an exemption applies. The entities will receive an ID and will have to update the Companies House register in the event of any changes concerning the beneficiaries, owners, or managing partners. Should they fail to do so, they could be prosecuted in the criminal courts.

This test, paired with sanctions, makes it practically impossible for UK businesses to deal with any Russian client. In practice, however, many firms are still only in the process of reviewing whether to cut ties with Russia – or haven’t publicly commented on their decision. Bloomberg reports that this is the case with many of the biggest names in the legal industry, such as Clifford Chance, CMS, and Slaughter and May, are either still reviewing whether to cut ties, or have decided to not comment on whether they are cutting ties with Russian oligarchs and clients that aid Putin’s regime.

The Herald has shed light on a number of loopholes in this regulation. With a private jet leaving an airport in the Highlands and landing in Russia, the travel ban is clearly not absolute. SNP MP Ian Blackford said that it’s “gut-wrenching” to see planes other than those carrying humanitarian help in Moscow’s airspace. The Herald reports, though, that the plane took off for two reasons despite the tight sanctions.

One was the short notice, merely 24 hours, that the airport received regarding the ban on UK-Russia flights. The second was that the plane was registered with a third, Estonian, party. It is a very common trick used among all areas of business to have the subject matter either registered to a different country, including tax havens, or to a different person in hopes of performing a borderline illegal dodge from legal responsibility.

Many lawyers, represented by the Law Society, believe that they should be free to choose their clients, no matter who they may be. They argue that it’s the duty of solicitors and barristers to represent their clients in their best interests and ensure that the courts act fairly.

Stephanie Boyce, the President of the Law Society, said that adhering to those rules and letting lawyers pick their clients will make it clear to the public that “they live in a country that respects the rule of law, unlike Putin’s tyrannical regime.”

It seems that the Law Society’s wishes to protect the interests of lawyers, and their right to choose their clients. In their eyes, everybody, no matter who they are or what their alleged crimes are, should have the right to legal representation.

This is true: everybody does have this right. Even those associated with an authoritarian regime that has caused the deaths or displacement of millions in Ukraine. But at the same time as lawyers have stood idly by while watching Julian Assange be extradited, with little prospect of being tried fairly, can they truly claim to be defenders of the rule or law? Or is the difference in approach simply the result of the huge amounts of money that Russian clients can put in their pockets?

The sanctions imposed by the British government are undoubtedly of huge help to Ukraine. But they’re not perfect: various loopholes exist and there’s still a coordinated effort by some in the legal profession to argue against them. Whether what we have in place is enough to support Ukraine throughout the war, only time will tell.