The UBI $ and the Digital 元, the Quiet Money Wars 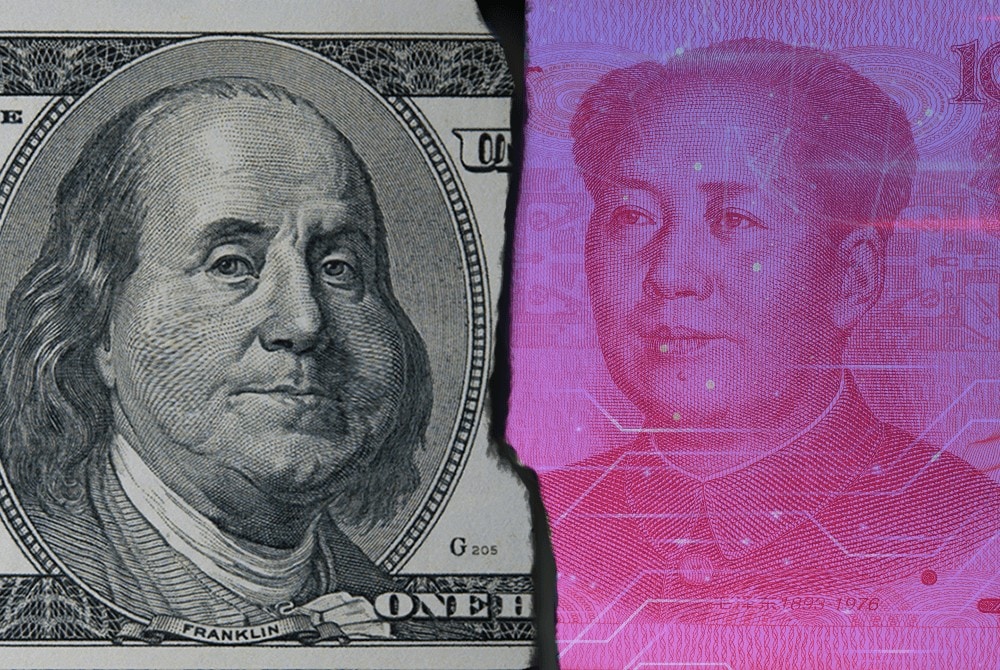 中国 vs. the United States of America, the quiet money war edition. Brought to you by DisruptionBanking.

Although the COVID-19 outbreak, an entirely coincidental occurrence, has exacerbated the tit-for-tat between Washington and Beijing in an escalating war of words and trade that was officially launched with the “Trade War” in 2018, another war is being waged, that in the global financial money markets.

As our publisher likes to quip when in doubt about the state of the world – “follow the money”, and arguably no other forex pair can be called as important in today’s climate as that of the USD/CNY or $/元 pair.

But do not think that it is an equal match. The $ takes up more than 88% of global FX trade daily (bought and sold), with the 元 taking just 4.3%. However, a large portion of the Hong Kong Dollar’s market share (3.5%) can also be attributed to Beijing as we noted last September that 67% of the flow of inward Foreign Direct Investment into China comes through Hong Kong and the city is also the recipient of 58% of the flow of Outward Direct Investment from the Mainland.

A large portion of Singapore’s FX trade (1.8% of global total) is also most probably Chinese-controlled owing to the fact 76% of sunny Singapore is ethnically Chinese.

Read : The Fintech Guide to Singapore

Another way to judge superpower-controlled trade is to look at the weighting of Special Drawing Rights, the “supplementary foreign exchange reserve assets defined and maintained by the International Monetary Fund.” The U.S. and China have a weighting of 41.73% and 10.92%, respectively.

This is calculated every four years. And is due to be reweighed in 2021.

Additionally, the New Silk Road (did they consult Ross Ulbricht on that one?) aka the Belt and Road Initiative that China has built, has put the People’s Republic of China (PRoC) in a position of immense power in the East, with the project reaching as far as Italy.

In response to this gigantic stealth/trade power move, the U.S. launched the Blue Dot Network.

In a trade delegation to India in February, Trump (looks like someone’s wooing the next super power) told Modi & co that “to guarantee that the infrastructure of the future is built in a safe, transparent, and accountable manner, the United States is working with a range of partners, including Australia and Japan, to create the Blue Dot Network, a major initiative to ensure countries around the world have access to private sector-led, sustainable, and trustworthy options for high-quality infrastructure development.”

So, that’s the market share and positioning done. Tick. Lets move on to what’s in store for the world next (excluding mass unemployment and a horrific cough).

The PRoC have been very busy, launching none less than 84 Digital Currency Patents in preparation for a CBDC, perhaps in response to the heightened talk of the Libra Project by Facebook last year.

*Quick side note on the magnitude of a Central Bank Digital Currency and probable effect on the banking system. Imagine a digital £ that you have in a wallet with the Bank of England. The BoE is not about to fail anytime soon so you bank with the BoE instead of a ‘normal’ retail bank such as Barclays for example. Ergo retail banks have a lot less control over the money supply, but the national banking system as a whole is a lot more secure as every wallet is Central Bank (CB) backed. As a business, you now want to trade with the UK as the money system is far more controlled and less susceptible to failure (eg 2008).

China can do this however, as the PRoC own all Chinese banks outright.

Meanwhile, the Fed unleased ‘unlimited QE‘ on Monday (yes, you read that right, a cheque that never runs out of zeros). This will likely ramp up M2 money supply and is in danger of increasing inflation levels far higher.

if the new QE program is of similar magnitude as QE1, the #feds balance sheet would double to 8 trn pretty soon. Quite likely it becomes even LARGER. pic.twitter.com/3BVv1OZumJ

And there have also been calls for temporary UBI from both sides of the American political divide owing to the worst Quarter of GDP in historical record predicted for Q2, as we noted in our Terrible Tuesday column.

Even Britney Spears, the latest disruptor, got involved and called for the redistribution of wealth.

But the printing of Dollar$ to infinity may fluster investors and businesses and force them to consider Gold and Bitcoin more strongly in trade, thereby decreasing some $ global trade share.

In conclusion, if the US is to retain global trade dominance post 2021, the Fed has a very precarious balancing act between feeding the people via UBI but not inflating away the reserve status of the $. And the disruption in the Chinese $8.4tn shadow banking sector is going to be yuge once that digital 元 hits.

Editor’s note: we are a UK-based publication, so we roll with Her Majesty the Queen. 10,560 yards away.