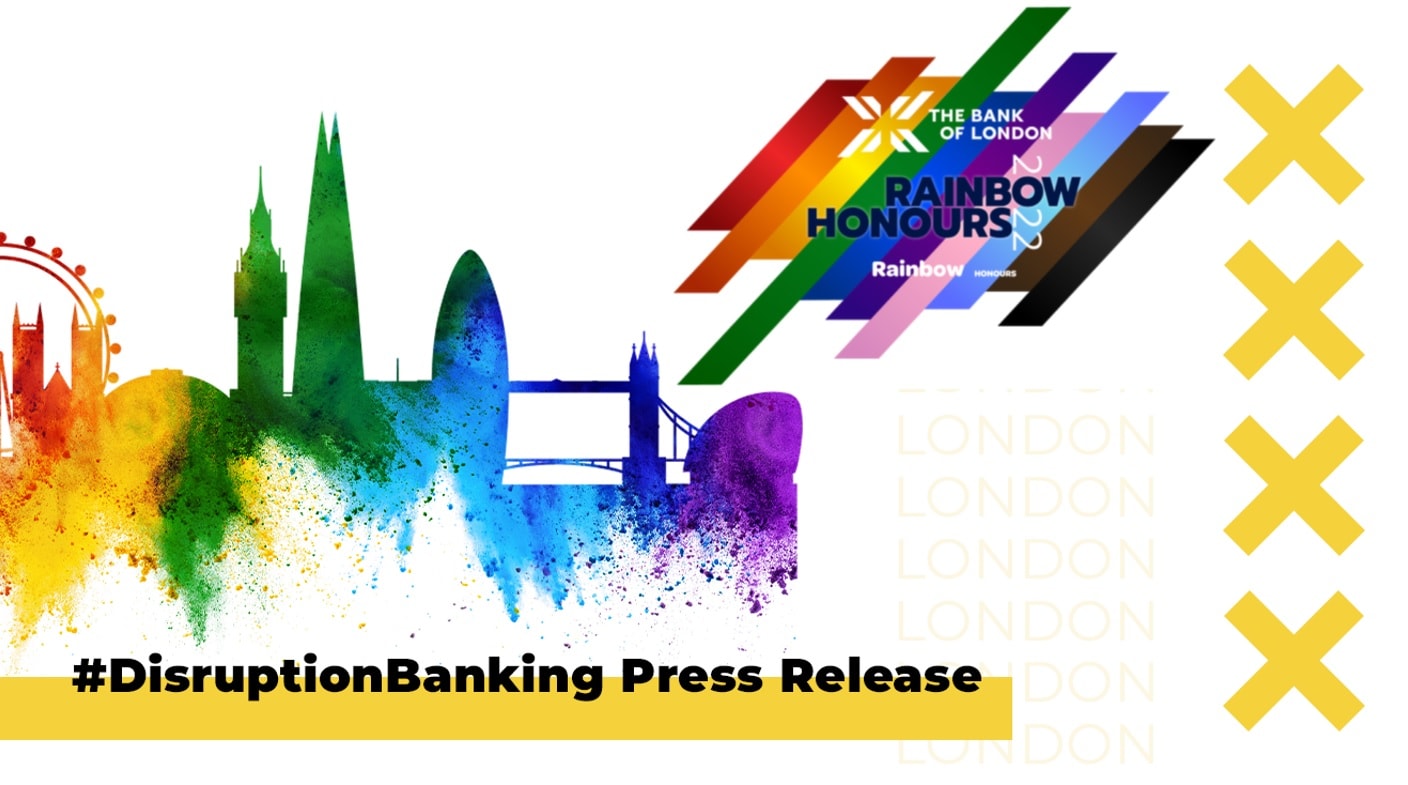 LONDON and NEW YORK, 2 March 2022: The Bank of London, the next generation technology company and the world’s first purpose-built global clearing, agency, and transaction bank, today announces that it will be partnering with the Rainbow Honours to launch ‘The Bank of London Rainbow Honours’.  These awards celebrate the groups, institutions, charities, businesses, and individuals from the entire LGBTQI community who have worked all year around to influence, change, and promote LGBTQI equality for the betterment of all.

Taking place on 1 June 2022 at 8 Northumberland Avenue in central London, ‘The Bank of London Rainbow Honours’ will showcase and celebrate those who strive to make the workplace a better place for LGBTQI+ employees and those who give up their spare time to volunteer.

The awards will also salute businesses who demonstrate their commitment to equality all-year round.  At The Bank of London, equity, diversity and inclusion are at the heart of our business sitting alongside our company values which include authenticity, empowerment, courage and kindness. The whole Bank is empowered through this lens, living them every day – starting from the very top. It isn’t just paying lip-service like some companies do – our Group Chief Executive & Founder, Anthony Watson is the first – and only – openly gay person to launch a bank in the United Kingdom, and currently the only openly gay Chief Executive of a British bank.

“As LGBTQI+ history month draws to a close, I’m delighted to announce The Bank of London Rainbow Honours. In a society where LGBTQI+ people have been routinely marginalised; it is more important than ever that we honour those members of our community who are our role models, those who are our allies, and those organisations who are working tirelessly for the betterment of LGBTQI+ people across the United Kingdom.”

“We are incredibly excited to be announcing details of The Bank of London Rainbow Honours. These awards will recognise the individuals, organisations, charities and unsung heroes who help to make the world a better place for LGBTQI+ communities. Over the last 20 years, the UK has led the way on LGBTQI+ rights with historic legislation to create a fairer, more accepting and more diverse society but there is still so much more to do. We are now calling on the public and businesses to get involved by nominating their champions today.”

Nominations for The Bank of London Rainbow Honours are now open.

LGBTQI CHAMPION – This honour is given to an individual who has used their time to volunteer for charities or other good causes, and has leveraged their experience and skills to mentor others either within or outside the workplace.

OUTSTANDING LGBTQI NETWORK GROUP – Awarded to the corporate LGBTQI staff network which provides the greatest support to its members.

HOUSING PROVIDER – This award is given to a housing provider who actively promotes their schemes to the LGBTQI community.

CAMPAIGN – Awarded to the best campaign, whether it be marketing or a campaign to promote LGBTQI visibility.

COMMUNITY HERO – Awarded to an individual who has gone over and above to support the LGBTQI community at its very roots, in the place where they live.

CELEBRITY ALLY – Awarded to someone in the public eye who does not identify as LGBTQI but who uses their platform and influence to promote LGBTQI equality and visibility.

RISING STAR – Presented to an individual who has seen their profile increase dramatically over the past year to the benefit of the LGBTQI community, either within the workplace or the wider community.

CORPORATE LGBTQI CHAMPION – Presented to a LGBTQI individual who champions the community in every aspect of their work life and beyond.

CORPORATE ALLY – Given to someone who does not identify as LGBTQI but who has leveraged their influence to demonstrate support for LGBTQI equality, diversity and inclusion in the workplace and beyond.

The Bank of London – SMALL BRAND / ORGANISATION – This award is given to a SME which has demonstrated outstanding commitment to an LGBTQI community.

LARGE BRAND / ORGANISATION – This award is given to a company or other organisation which has demonstrated outstanding support for the LGBTQI community.

MEDIA MOMENT – This honour is to celebrate a moment in media history that has impacted the LGBTQI community.

MEDIA DIVERSITY – This award is presented to an individual or programme that strives to ensure that diversity and inclusion is at the very core of everything they do.

CAMPAIGNER / INFLUENCER – Awarded to a person who identifies as LGBTQI and whose words and deeds have helped further the cause of LGBTQI equality.

LGBTQI ICON – Awarded to a person who identifies as LGBTQI and whose words and deeds have helped further the cause of LGBTQ equality.

About The Bank of London

The Bank of London launched 30 November 2021, with a $1.1 billion valuation, making it the first pre-revenue bank in history to attain ‘unicorn’ status upon debut.  It launched as the sixth principal clearing bank of the United Kingdom, and only the second in 250 years.

The Bank of London is a leading-edge technology company and the world’s first purpose-built global clearing, agency, and transaction bank. We leverage our patented technology innovations and differentiated bank capabilities to lift economies and communities by powering the borderless economic infrastructure of the future.