The IMF at MYFintech Week Malaysia: CBDCs, Risks and Rewards 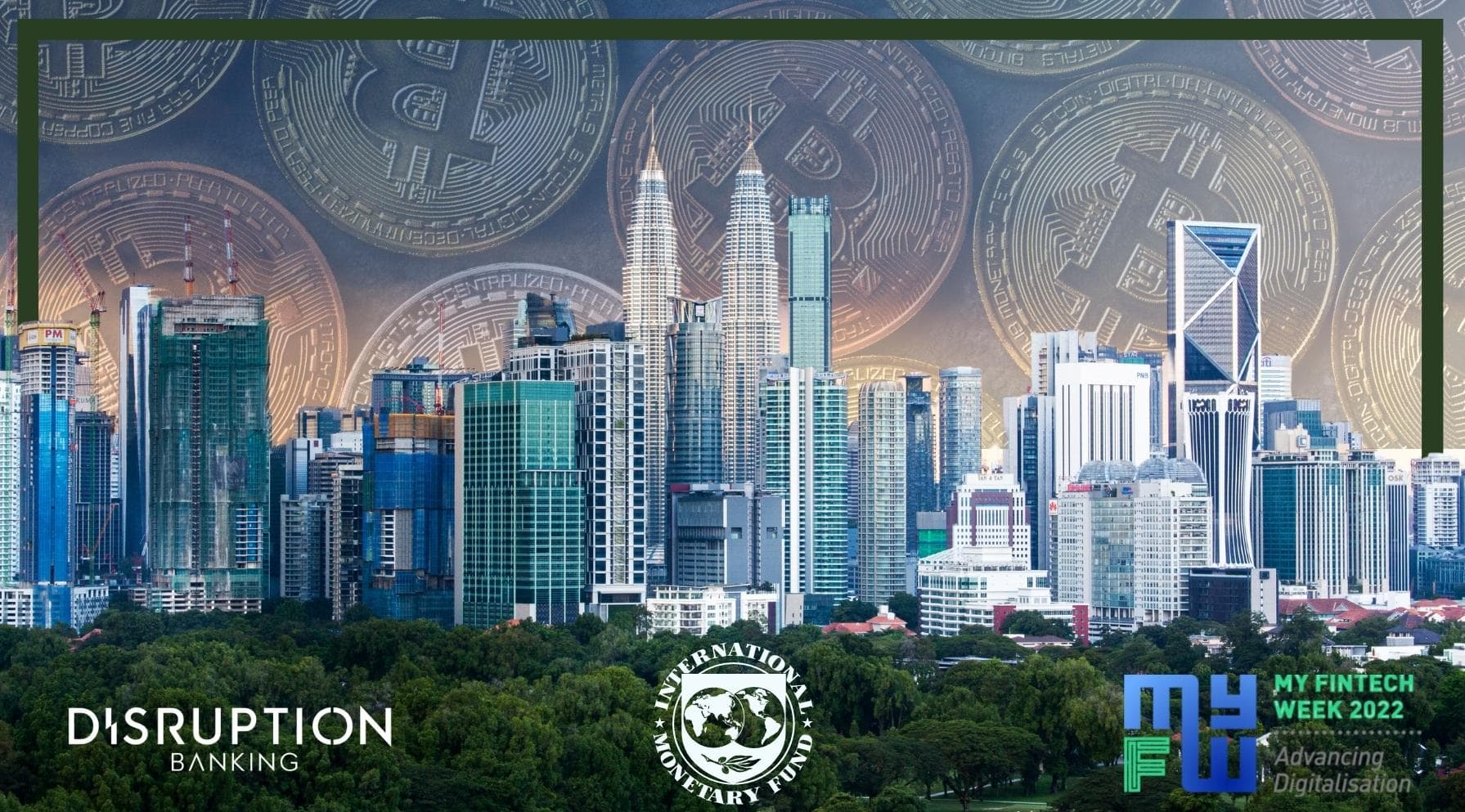 MYFintechWeek, the flagship Malaysian fintech event, kicked off this Monday, with digital banking, cross border payments, and sustainability the main areas of focus this year. The second day of the virtual conference started with the keynote speech of Tobias Adrian, Financial Counsellor and Director at the Monetary and Capital Markets Department of the International Monetary Fund, titled “Crystalising New Financial Realities.” Adrian focused in particular on digital money: Central Bank Digital Currencies (CBDCs), crypto assets, and stablecoins, exploring how these new forms of money could reshape the international monetary system.

“Digitalisation is changing our understanding of what money is and how it operates,” Adrian said. “There are private sector innovations like crypto assets and stable coins, but there are also public sector design programs like the Bahamas issuance of Sand Dollar, and China’s experiment with the digital Yuan.”

“Currently, there’s huge interest globally in CBDCs, which are now being explored by more than 100 of the IMF’s 190 members. Approaches differ according to each country’s particular circumstances. Some are still cautiously analysing the policy motive for such issuance, while the few are actively prototyping various options in safe environments, or launching live pilot programs.”

Adrian focused on the potential benefits that CBDCs can bring about, highlighting their potential to make payment systems more cost effective, competitive and resilient. He also noted their potential to foster financial inclusion, and streamline cross border payments.

“Due to their digital nature, CBDCs could reduce the cost of managing physical cash, which can be substantial. By offering a low cost alternative, CBDCs can help discipline payment markets, which are often highly concentrated. They could also improve the resilience of payment systems through the establishment of an alternate decentralised platform.”

“In countries that have large numbers of people who are unbanked, CBDCs could help enhance financial inclusion, especially if they’re paired with digital identification systems. Access to payments is often the first step toward greater participation in the financial system.

“CBDCs can be leveraged to improve cross-border payments, which are now often slow, costly, opaque, and not easily accessible. Cross-border payments largely rely on multi-layer correspondent banking relationships, which create long payment chains. CBDCs could instead be traded more directly to the extent that they share common technical standards and data compliance requirements.”

Despite all these benefits, Adrian was also careful to note the possible risks associated with CBDCs and how these risks could be mitigated. According to Adrian, one of the main challenges posed by CBDCs is the possibility of the banking sector’s disintermediation. With the widespread adaptation of CBDCs, deposits could be withdrawn abruptly from commercial banks. In turn, banks would have to raise interest rates on deposits to retain customers. Consequently, they would either have their margins compressed or charge higher interest rates on loans, potentially leading to credit contraction.

According to Adrian, another potential perils include reputational risk for central banks. There are also macro financial risks that can arise from the cross-border use of CBDCs. “Offering CBDCs requires central banks to be active along several steps of the payment system value chain,” he said. “This includes dealing with customers, including front-end wallets, picking and maintaining technology, monitoring subject tools, and being responsible for anti-money laundering processes. The failure to satisfy any of these functions, whether it is due to technological glitches, cyber-attacks, or simply human error, could undermine public faith in the central bank’s operation.”

“Finally, as costs decrease to hold the transact and foreign currency, countries with weak institutions, high inflation or volatile exchange rates could experience currency substitution, “cryptoisation” or dollarisation, as consumers shift their currency holdings away from domestic currencies. These risks can be mitigated through appropriate designs, for instance, offering a lower interest rate on CBDC holding.”

According to Adrian, cooperation among central banks will also be pivotal in building CBDCs that help mitigate some of the risks. He also suggested that the digital age of CBDCs could facilitate the regional pooling and sharing of reserves. But whether we can expect cooperation among the leading central banks is highly dubious. The People’s Bank of China (PBOC) recently introduced the digital yuan, which has been in development since 2014. Although the digital yuan currently only focuses on domestic retail payments, more than 8 million merchants now accept e-CNY. The volume of transactions made using the digital currency has exceeded 87.5 billion yuan ($13.78 billion). Crucially, China is exploring cross-border payments for the e-yuan, which is seen by some as an attempt to internationalise China’s currency and ultimately curb the global dominance of the dollar settlement system.

As of right now, the largest scale adaptation of crypto was carried out in El Salvador, where President Bukele made Bitcoin a legal tender in an attempt to bring more people into a more formal monetary system and reduce the impact of intermediary fees – a quarter of Salvadorian nationals live in the US, and remittances make up 21% of the country’s GDP.

However, the volatile price of the cryptocurrency might pose serious risks to El Salvador’s finances. This was partly the reason why Moody’s recently downgraded El Salvador’s credit rating. As Adrian pointed out, the adaptation of crypto is associated with various risks: widespread currency substitution could undermine monetary policy, capital flow measures could be more easily circumvented, and capital flow volatility could increase. There is also a risk of fragmentation of the payment system on a global digital divide, due to differences in countries access to new technologies.

So how could monetary authorities approach cryptocurrencies and stable coins to ensure that the international monetary system remains stable and efficient?

“Rules and conventions will be critical for monetary exchange rate arrangements, cross border payments for capital account transactions and for capital flows,” Adrian argued. “The system must continue to rely on mechanisms allowing for effective and timely balance payments adjustments and a global safety net. The system must have strong institutions to enforce these rules and mechanisms. To ensure we stay on the path leading to an inclusive and sustainable recovery, it is important that digital money be regulated, designed and provided so that countries maintain control over monetary policy, financial conditions and capital accounts.”

The key, he thinks, is that payment systems must become more integrated, not fragmented. They must work for all countries to avoid a digital divide. This begs the question: who will take the lead in designing such a system? The current economic order was designed by the West after the World Wars, and is still, to this day, mainly governed by the US, UK and Europe. This is despite the fact that these countries’ economic power has dramatically declined since the system was designed, meaning they arguably possess power that is disproportionate to their economic weight. Right now, the threat of being banned from the SWIFT payments system (whose servers are in Belgium, and thus governed by the EU) might deter Russia from invading Ukraine. As we design a new economic order, the construction and governance of modern financial systems must acknowledge the fact that economic power has shifted eastwards. Whether new international payment systems can indeed be integrated will largely depend on whether the US can accept China as an equal (or even superior) economic power.

Adrian mentioned that most of the money that we can use today is issued by the private sector in the form of commercial bank deposits. These are safe because issuances are very closely supervised, and banks are required to adhere to clear legal and regulatory frameworks.

“Those same factors must also hold for private issuers of digital money. We need clear legal frameworks to determine whether these new forms of money are deposits, securities, or commodities. Clear regulations must be enacted, so these forms of money fully address risks to financial stability and integrity, consumer protection and market contestability.”

“Once those rules are clearly written, some providers will surely drop out on the market. But others will coexist with CBDCs. CBDCs and private digital money isn’t an either-or, it is a coexistence. Consider that private solutions can build functionality on top of CBDCs, and potentially can even receive CBDC in exchange for a private payment token. The future is likely to see a continuum that concludes various forms of money, just as we see today.”

Concluding his remarks, Adrian noted that “we’re at an exciting moment in the evolution of currencies and indeed the evolution of our very concept of what money is, and what benefits money should deliver. If we design digital currencies with caution and precision, and they fully frame the adoption with legal and regulatory systems that maximise the benefits and minimise the risks, we could be on the verge of an era that fulfils the promise of a new financial reality.”

CBDCs, and digitisation in general, open up the possibility of more integrated, international financial system. This system could also include unprecedented amount of people in the formal monetary system. However, whether new financial realities will indeed be a success story might depend on the scope of cooperation between East and West.