Why are NFT artists destroying their own art? 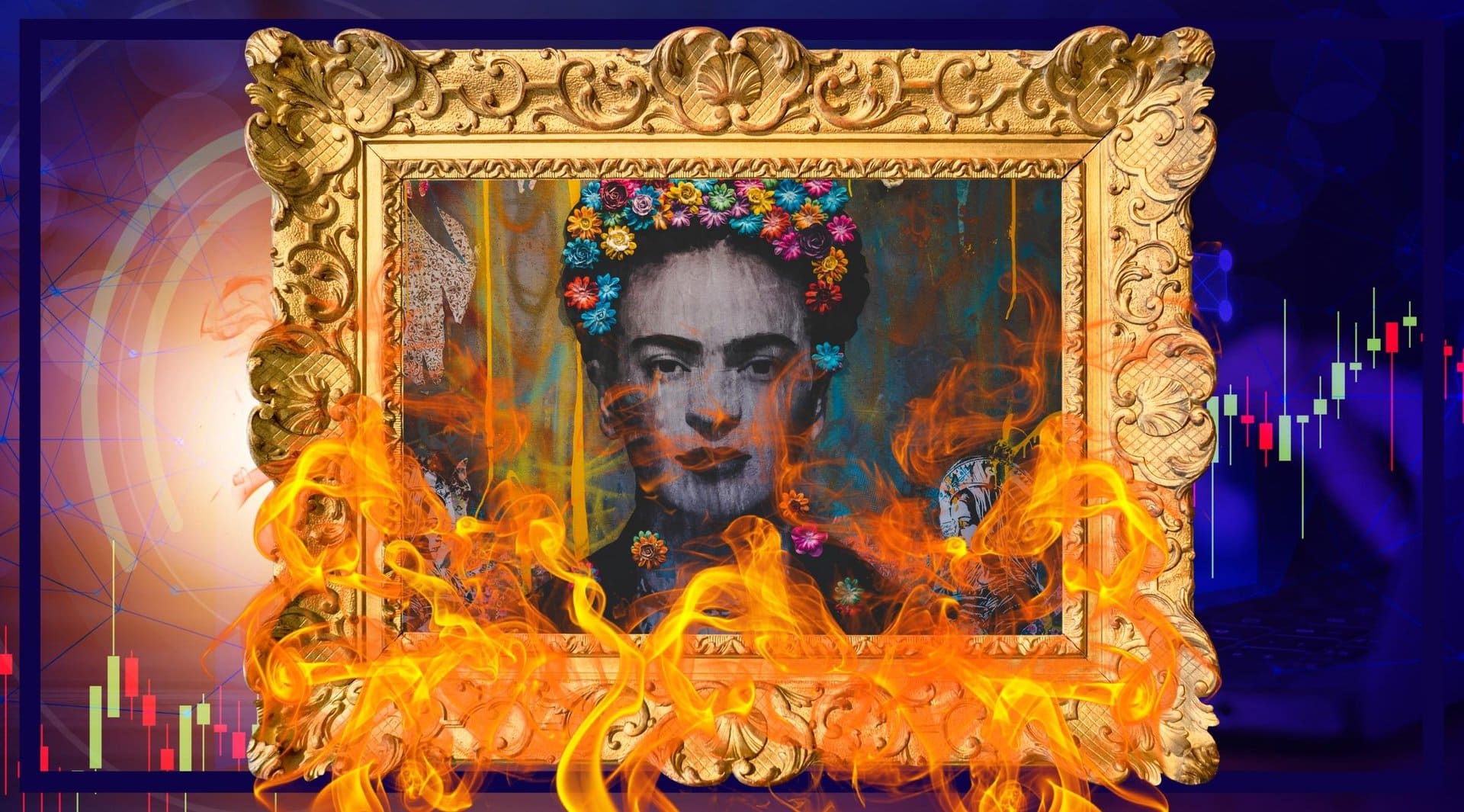 Art collector Martín Mobarak is under investigation after he claimed to set fire to a piece of Frida Khalo, potentially worth up to £10million. This stunt was aimed to draw attention to the 10,000 NFTs that he’d made of the artwork. The Mexican entrepreneur and founder of the Frida.NFTs has come under backlash following the stunt, which he performed in his mansion and involved burning the drawing in a martini glass. The stunt was uploaded to YouTube, with the description including a quote from Mobarak stating this would “revolutionise” the art world.

This week Damien Hirst seems to have followed suit and burnt multiple pieces of his art, which he copied into NFTs and sold on a live video stream. In addition, earlier this year in New Zealand, a Charlies Goldie artwork was copied as an NFT, with the auction house telling the buyer to smash the original glass plate photo.

But are these stunts just making people even more wary of the decentralised world? And does the NFT space want to be known for capitalising on vandalism, when it’s meant simply to be a means to buy and sell artwork more easily?

It’s true that artists have long sought to draw attention to their work through “shock” tactics of this kind. Some may compare these stunts to that of Banksy and the shredding of “Girl with Balloon,” which actually increased the selling price by £4-6million. Many have argued that Hirst especially may be cynically motivated, given his previous questionable business moves. Hirst has made multiple copies of his work throughout his career, which many have argued has devalued his art. Perhaps this stunt was a strategic way of not only moving into the digital art space, but also reducing supply and therefore bumping his valuations back up.

However, it could also be argued that shocking acts and the taking of risks is precisely what many NFT buyers are attracted to. Although this stunt may have put off some people, particularly those involved in the traditional art space, it could also inspire others with exposure to NFTs to try and replicate it and draw attention to digital assets. The danger though, is that the proliferation of such stunts simply makes the NFT market a playground for rich individuals, rather than a space for the average person to invest and grow their wealth. That said, the £1000 minting fee levied on uploading an artwork already prevents less established individuals, and less wealthy artists, from using the platform.

Some have disputed whether Mobarak really did burn a Frida Khalo. Mobarak told Vice News he bought the drawing in 2015 from a private art collector. Frida Khalo illustrated Fantasmones Siniestros in 1944 and gave it as a gift to the Venezuelan art critic Juan Röhl. The drawing was eventually acquired by the New York gallery Mary-Anne Martin Fine Art in 2003, and then was sold several times since. As it is a federal crime to destroy an artistic monument intentionally in Mexico, Mobarak is under investigation.

The whole saga has undeniably drawn attention to the Frida.NFTs, which are priced at $4,000 each. However, with the NFT trading volume having fallen 97% since the start of the year, and with most remaining dubious of NFTs, are people going to purchase them in any case?

Although in 2021 popularity in NFT training increased – with multiple companies including Samsung, Meta, and LG launching NFT-specific marketplaces – mistrust has since continued to grow. In January it was revealed that over 80% of the NFTs that were minted for free on OpenSea were fake or stolen. The next month, the same NFT marketplace halted trading due to widespread fraud. No doubt these stories may put off many people from investing in NFTs and trusting the benefits which many promote. Could artistic vandalism, offputting for most people, reinforce this trend?

The NFT space has been popular with artists and art collectors as a means of trading art more easily, but a lack of regulation is also causing issues from their perspective. To stop devaluation of art works, some art galleries regulate themselves to stop multiple artists’ work being sold at the same time, meaning the value of the artwork remains roughly the same. Overselling leading to devaluation, as was proved by Hirst himself in 2008, when bypassed dealers and sold $200million worth of art at Sotheby’s. This led to prices being dropped, as well as collectors being left with art valued a lot less than what they bought it for.

Hence the need for internal regulation. However, in the NFT market there is no regulation at all, meaning saturation of the market and multiple copies being made of art works is causing devaluation. This is perhaps prompting the kind of stunts we’ve recently seen, which is an attempt to promote NFTs and make them more unique in spite of prevailing market forces.

The issue is that without regulation, these stunts will continue, and the NFT market will be discredited as a result. Regulation may be needed to ensure that the NFT market ensures satisfactory prices for artists, in such a way that deters them from taking this type of action. This could be the only way to return the market back to its founding principles and make sure it delivers what it was originally intended for.