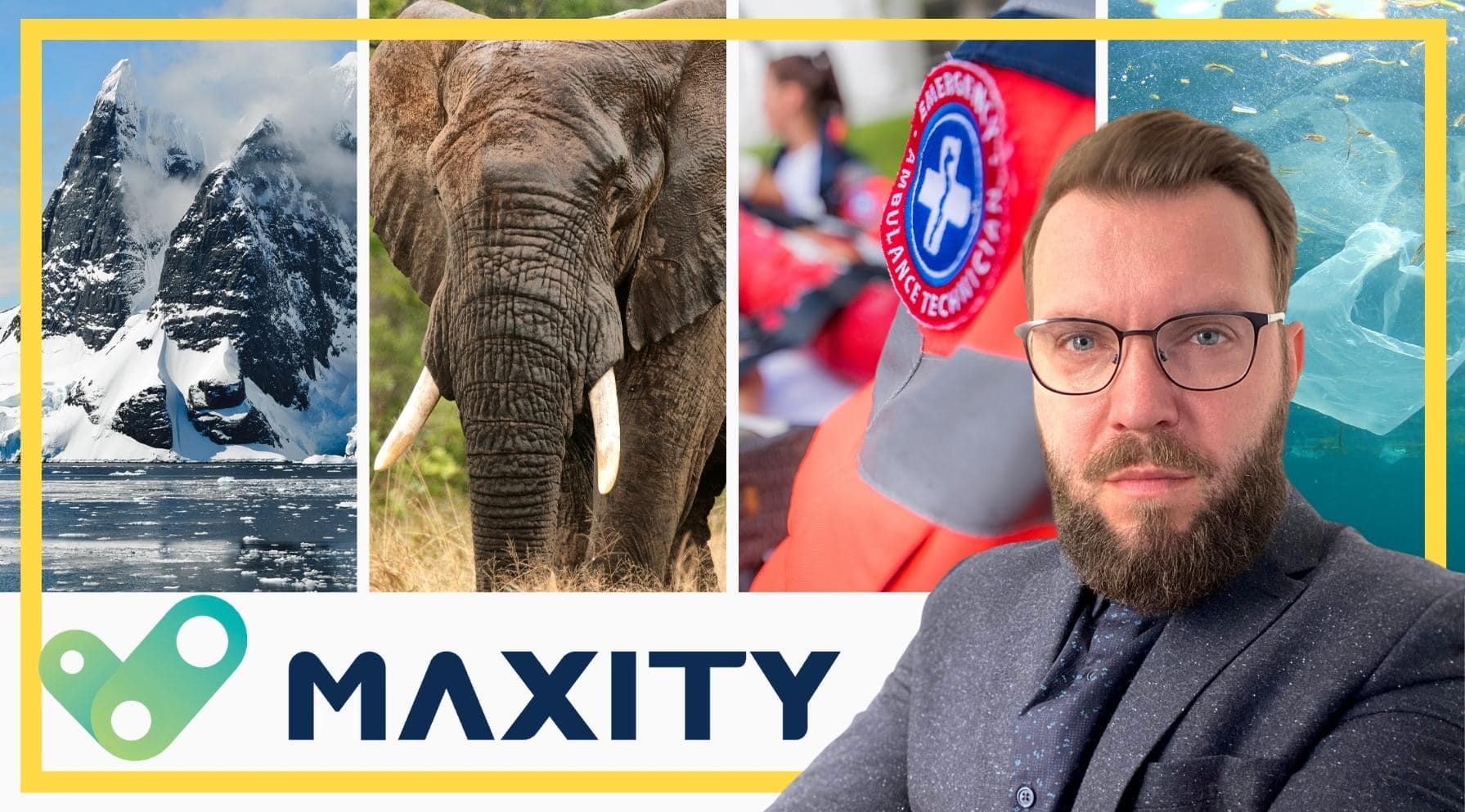 Last week, the world’s first DAO-based charity NFT marketplace – Maxity – announced its pre-launch. Maxity, which will begin operating at the end of March, is a blockchain and smart contract powered NFT platform that has been designed exclusively for “good causes.” Essentially, the idea is to provide an additional channel for charities and NGOs to raise funds, through offering NFTs to investors and supporters.

This is an interesting contribution to a space which has come under fire from some quarters. The typical criticisms levelled at NFTs include allegations that they are energy-intensive and speculative assets, largely flogged to celebrities and naïve investors. But is this fair? To discuss how NFTs can potentially make a positive contribution to the charity sector, we spoke to Justin Kairys, Maxity’s Head of Development.

In outlining how the project came into being, Justin told us that it originated from a “team of blockchain developers, NFT enthusiasts and charity trustees” who “wanted to build something that’s good for the world.” He personally began as a software developer, moving into the blockchain space a few years ago to work on a number of blockchain projects. Now he is seeking to use this knowledge and experience to help build a unique kind of NFT marketplace:

“We thought about DeFi, we thought about some other digital products, and eventually we decided to go with an NFT Marketplace that uses DAO model. The problem with NFT marketplaces at the moment is that the main one – OpenSea – is just so dominant. Everyone goes on OpenSea and smaller markets get left behind.

“But we thought, there is an opening for another marketplace – if we become specific and target one area, we can actually be quite successful. That’s why we decided to target NGOs, charities and fundraisers, and to build a platform where NGOs and others can raise money.

“We have started working with a few charities already, one of them is the Magna Carta Sustainability Foundation. One of our trustees is currently in Ghana, where a charity called Turbo Ghana is planning to launch an NFT to help fund the construction of a school.”

While Justin acknowledged that there is “nothing wrong with traditional methods of raising money,” he believes that Maxity’s platform offers two main advantages. The first is simply that it opens up another revenue stream, increasing the number of ways that donors can contribute and thus encouraging more donations. The second is that the blockchain can, in his words, “bridge the gap between the donor and the organisation:”

“Individual donations to charities and NGOs are not publicly traceable. It’s actually quite hard to see who donated to who, and what the organisation did with the money that was donated.

“Say a donation is set up on a monthly basis, to go towards a child’s education, for example. There’s a large gap between the donor and the organisation – knowing what exactly the donor has achieved with his donation is quite hard to do; you simply don’t know. Did the charity actually fund the kid’s education? No one knows.

“With the help of the blockchain, every transaction is visible. That’s how we bridge the gap between the donor and the organisation. By using our platform, the donor knows exactly what they’ve supported because it’s represented by an actual NFT, which is a digital representation of the actual good. It could, for example, be a picture of the project – and there is also a public record that is owned by them, so they can share the purchase on social media.”

Maxity is a for-profit company that seeks to become a decentralised autonomous organisation (DAO) where fees, decisions and ownership gets redistributed amongst those who support and contribute to the platform. The marketplace’s business model works through the collection of platform fees – which, at 2%, are “much cheaper than everyone else.” That said, Justin was keen to emphasise that their own business structure seeks to reflect their mission of doing social good. The main example he cited was their decision to use the Polygon network at the start rather than that of Ethereum:

“The Ethereum network consumes 79,000 gigawatts of energy per year – about the same as the whole of Argentina. The Polygon network uses about 0.79 gigawatts, which is crazy when you think about it! We didn’t want to be like other blockchain projects on Ethereum, which are so power-hungry and not energy-efficient. Polygon is faster, more eco-friendly and the fees are minimal – there are almost no fees. 2022 will be the year of Polygon.”

Using a Polygon-based network might, then, help shield NFTs from some of its detractors:

We ended the conversation by looking at what kind of user Maxity is targeting. Is their platform designed for people who simply want to make a charitable donation, or those seeking to make money through trading NFTs? In response, Justin said that this will depend on how individual charities will approach the project:

“The answer for that is that we don’t know yet. It mainly depends on the charity and how they want to use particular NFTs. Do they want to present a problem that can be solved quickly, or seek funding for an ongoing development? The timespans will dictate how long an NFT can be used or traded.”

All of Maxity’s NFTs are what Justin called “future-proofed.” This means they are coded in such a way that will allow them to be used in the metaverse in a 3D (or even different) form, if and when this technology becomes widely available. In theory, this could mean that those who purchase these NFTs at an earlier stage see their “investment” appreciate in value – appealing to the more speculative branch of investors. But Justin argued that the main purpose of Maxity’s project is to offer NFTs, regardless of potential fluctuations in value, an actual purpose – to offer NFTs that do social good:

“I think the reason why people want to buy NFTs is almost always the same – they want to make a profit. Same with crypto, why do people buy cryptocurrency? Mainly not because you want to use it in a decentralised way, mainly it is to make money. The same applies to NFTs. There are a very small portion of people who are real collectors of digital art or digital goods, and there’s another form of people who are celebrities wanting to brag about NFTs.

“Some of the projects on OpenSea are brilliant. They are designed perfectly, the images are great. But what’s the purpose? What are they for? All I am supporting is the creator. That’s it.

“But if the creator works with a charity on our platform, now there is a purpose. You’re not just supporting a creator, you are supporting a good cause. When you think about bragging rights, I think the real bragging rights are here. Anyone can buy an NFT with us and say, “look, you know what, by buying this NFT I’m actually doing something good.”

This is clearly an interesting development in a space which has attracted its fair share of controversy. Many have understandably suggested that NFTs, when presented with regards to a vague concept of “digital art,” have no real value or usefulness. The hype surrounding NFTs, and the crazy valuations that some have attracted, have caused either derision or concern in many quarters. But what Justin and Maxity are trying to do is solve this problem – to give NFTs real value and usefulness in promoting social good. The advantages not just for the charities and organisations involved, but the entire NFT space, could be considerable.