Why Cardano ISPOs are a good choice during a bear market 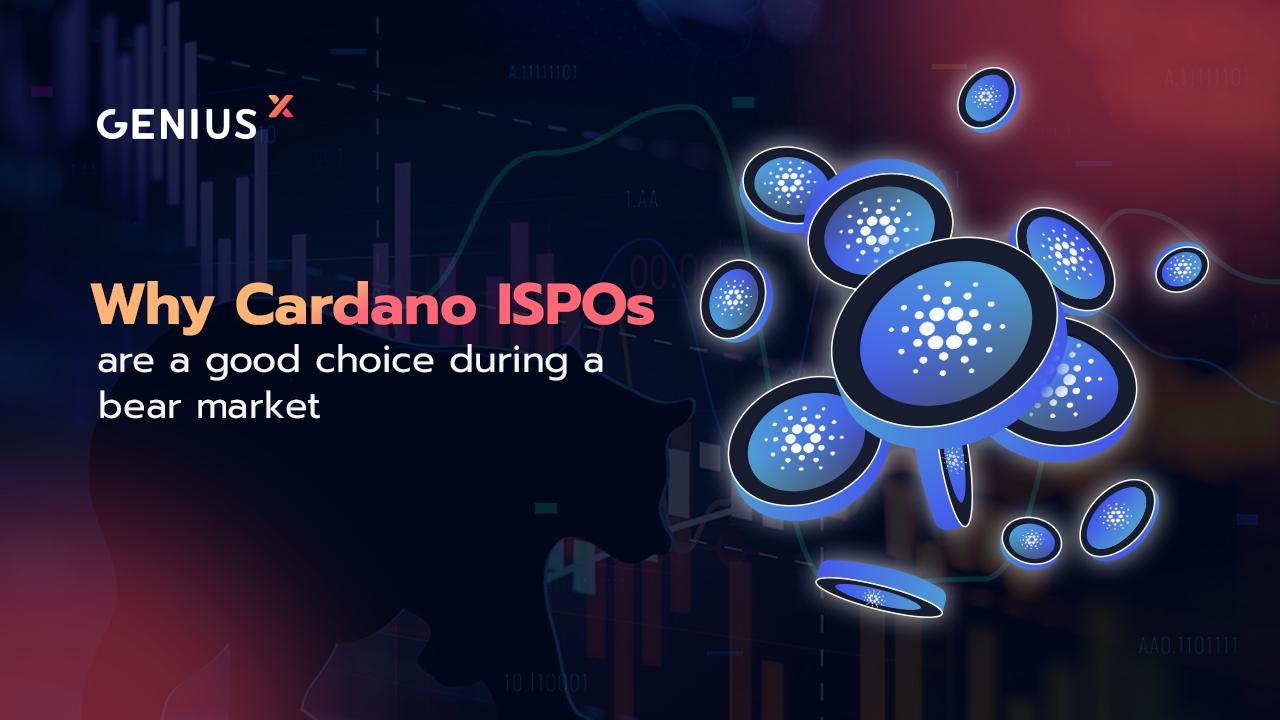 Digital Assets are in the news every week. However, it’s not just bitcoin that you may have been hearing about recently. #DisruptionBanking reached out to Genius X for news about the ‘Japanese Ethereum’ which Cardano is often familiarly spoken of. With a fork in the cryptocurrency coming up and multiple excellent use cases to examine, we hope you find the story as compelling as we did.

We are currently in a bear market. From April 1, 2022, to May 15, 2022, the S&P 500 index value dropped around 12%. As global adoption of cryptocurrencies increases, so has the correlation of major cryptocurrencies with the stock market. In the same period, in USD terms, BTC’s price declined around 32%, ETH’s price declined around 38%, and ADA’s price declined around 48%. In addition, UST, one of the biggest algorithmic USD stablecoins, depegged with its value falling from $1 to $0.12 between May 1, 2022, to May 15, 2022. LUNA, the backstop currency meant to allow UST to keep its peg, went from $80 to less than $0.01 in the same period, wiping out $28 billion in market value for holders of the token.

While many may sell during this period, others will begin to look for under-valued assets with real utility. These assets are the most likely to survive the bear market and appreciate in the future. Cardano, an open-source decentralized blockchain with smart contract capability, is one of the most innovative blockchains due to its research-based approach. In addition, Cardano uses its Extended Unspent Transaction Output (EUTxO) model, allowing for determinism and parallelism of transactions that are lacking in blockchains like Ethereum that use an account-based model.

Cardano also utilizes a novel delegated Proof-of-Stake (dPoS) consensus mechanism which greatly reduces the resources needed to operate the network compared to Proof-of-Work (PoW) chains like Bitcoin. One of the biggest innovations from Cardano’s dPoS system has been the Initial Stake Pool Offering (ISPO). In an ISPO, a new project that needs funding for a Cardano-based dApp will open up a public stake pool. ADA holders who delegate their ADA to the pool will receive utility tokens of the project’s dApp in exchange for their ADA rewards of ~ 4%-6% APY, which go to the project’s team. The project would use the ADA to fund operations, development, and marketing.. Essentially, the ISPO has become a new source of fundraising for startups in the Cardano ecosystem.

MELD, a DeFi lending protocol built on Cardano, raised $10 million USD in three months via an ISPO. Since then, ISPOs have become ubiquitous in the Cardano ecosystem. But what are the unique benefits for delegators who participate in ISPOs and why should you consider ISPOs in a bear market?

Low risk — To support many projects on other platforms, you typically must give up your crypto in the hopes that the token will do well. In addition, if the tokens are smart contracts like on Ethereum, you will hope that the developer didn’t make a faulty smart contract with bugs or vulnerabilities that could get your assets stolen. In an ISPO on Cardano, you don’t have to spend your ADA to support a new project and your principal is never at risk, secured by the Cardano blockchain. You only forgo future ADA staking rewards.

For example, let’s say you delegated 1,000 ADA in a six-month ISPO for a new dApp. In exchange for the project’s tokens, you give up a potential staking rewards of 25 ADA. After the ISPO is over, the project fails to meet their goals and the dApp is canceled. Your 1,000 ADA is still safe in your wallet, as delegation on Cardano is noncustodial, meaning you always maintain control of your funds. Your only loss would be the rewards of 25 ADA.

Pseudonymity — ISPOs are non-KYC (Know-Your-Customer), as you only need to have your ADA on a compatible wallet using applications such as Eternl, Yoroi, or Daedalus to delegate to a stake pool. As we’ve seen, public knowledge of financial support through ownership of certain companies or political contributions to controversial candidates has led to reputational damage, loss of work, and other consequences for individuals. Since ISPOs don’t require KYC, entities can support startup projects with greater anonymity than the stringent personal and information most countries require for those to support startups.

Accessibility — Another benefit of the non-KYC nature of Cardano’s blockchain is that ISPOs are accessible to anyone with no financial conditions. For example, some countries require individuals to have high incomes or a high net worth to support startups, eliminating many people participating in these innovative startups. In addition, there are typically high financial minimum contributions required to support a startup. In ISPOs, there are no financial conditions or restrictions on participation. It doesn’t matter if you have 20 ADA or 20,000 ADA, you can participate in an ISPO. Cardano’s ISPO model is more egalitarian than traditional finance by not limiting people by financial status or nationality.

ISPO period — Typical ADA staking rewards are currently around ~ 4%-6% APY. Therefore, to get substantial funding, projects must have an extended time period that the ISPO encompasses. You’ll see many ISPOs with time periods of three or six months, or more. This period is much longer than the seed or private sale rounds for venture capital. The benefit of the longer time period is that the project must stay engaged with the community about project updates, news, or technical changes. Since staking on Cardano is noncustodial, delegators can remove their delegation from a stake pool that’s part of an ISPO at any time, lowering the project’s funding. Therefore, projects must constantly interact with the community to build and keep their attention and interest. Otherwise, the delegators will withdraw their delegation for other opportunities. Projects that are scams, lack development, or show a lack of progress will find it harder to maintain delegation support for their projects.

Why Cardano ISPOs are a good choice in the bear market?

Long-term ADA holders who stake and participate in ISPOs should be excited about the Vasil hard fork, which is scheduled for the Cardano blockchain on June 29, 2022.  This update includes three Cardano Improvement Proposals (CIPs) and diffusion pipelining, which will increase the scalability of the platform significantly by allowing for larger blocks and increased throughput. The Vasil hard fork will greatly benefit Genius Yield’s upcoming order-book DEX release in 3Q2022 and many of the projects in the Genius X accelerator program.

With no KYC requirements, ISPOs offer participants pseudonymity and enable everyone to participate, regardless of nationality or financial status. Since ISPOs take longer, participants benefit from higher engagement from the project’s team. Cardano ISPOs also offer you the ability to invest in startups with no risk to your initial principal. Delegators who support a project’s ISPO with their ADA don’t risk their funds at all.  The Genius X ISPO is one of such examples – basically it’s a win-win mechanism, because you gain the tokens of a promising project while never risking your ADA, which never leaves your wallet.

Genius X provides all the tools startups need to succeed, such as business guidance and technical mentorship. Other key areas of support include fundraising strategy and execution, tokenomics design, product development, and marketing strategy. Genius X already has many projects who have joined its accelerator program. A few are listed below.

Genius X, an accelerator for early-stage blockchain startups building on Cardano, believes in the transparency and value that ISPOs provide for the community. Genius X is currently doing an ISPO where 25% of its total token supply will be given to the community. The ISPO will run from May 15, 2022, (Epoch 339) to September 12, 2022 (Epoch 363) and will last 25 Epochs.

Finally, the length of Cardano ISPOs make them a good choice in a bear market because if you believe in the long-term value of the Cardano ecosystem and the project’s utility, the intrinsic value of ADA and the project’s token could be reflected in their market values in the future when the bear market ends.

Genius X fosters innovation on the Cardano network and Web3 that empowers protocols to build impactful and scalable blockchain-based companies that will have a massive impact across the globe. We incubate, accelerate and scale incredible projects on Cardano and Web3 through our advisory, mentor, and growth experiences.