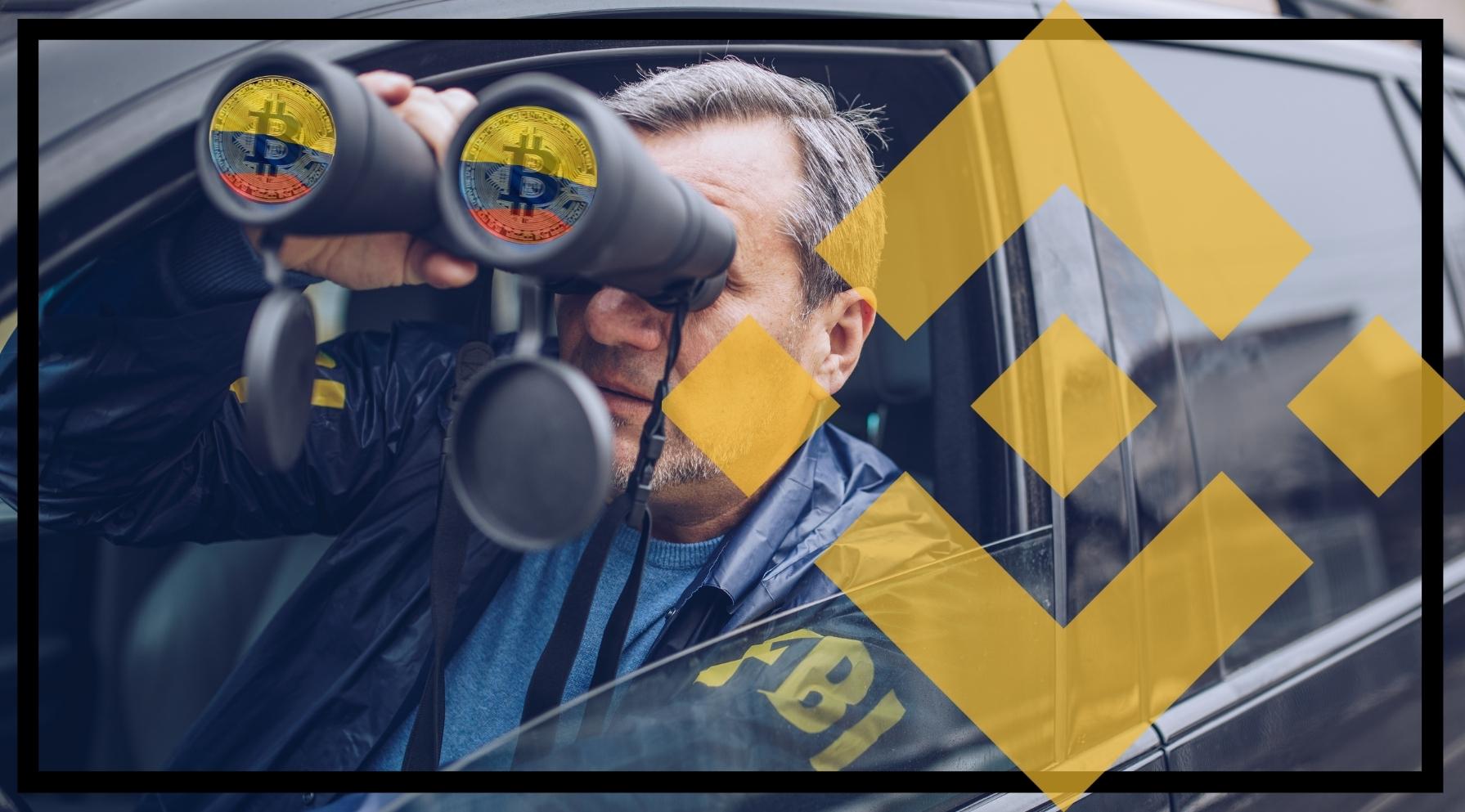 For Binance founder and CEO Changpeng Zhao, it’s mo’ money, mo’ problems. For the foreseeable future, Zhao, known as CZ, will be spending a lot of his time talking to attorneys and law enforcement officials from various countries. Regarding Binance, the authorities broadly want to know where the money comes from and where it goes. In response, Binance literally invited the authorities into the house. With so much daily volume, Binance had little choice. Now, they’re royally screwed: The SEC requested information about Sigma Chain AG and Merit Peak Ltd., which are both allegedly controlled by CZ yet trade crypto on Binance.US exchange.

Binance is the biggest exchange and the favorite of savvy international money-launderers due to its opaque practices and lax attitude. However, since becoming the target of international regulators, particularly the Financial Action Task Force (FATF) and now the SEC, Binance seemed to bend over backward to comply. Although eager to please, Binance’s approach is sometimes scattershot, abrupt, and foolhardy. Now, CZ is probably evaluating his options, weighing exit strategies and how each will ‘play’ with the cops.

Binance has been on a hiring spree, which led to a slip in standards. As Binance beefed up its compliance team, our reporter Harry Clynch bluffed his way through four Binance interviews with a fake identity and work history. Read about Harry’s adventures in his trilogy of articles starting here. In casual conversation, Binance employees alluded to financial activities that would run afoul of European law. There’s so much going on inside this company, regulators will have a helluva time figuring it out.

Binance allegedly dithered to implement anti-money-laundering measures, allowing transfers of funds from high profile hacks, drug trafficking, and terrorist groups. In 2018, the Spanish Guardia Civil dismantled a money-laundering network that sent 8.4 million Euro ($9.3 million USD) in Bitcoin to 174 Colombian accounts. It was just a drop in the bucket compared to the loot flowing into Colombian crypto coffers, of which Binance and other exchanges skimmed a little off the top.

Binance has also been working with international teams of police investigators to expose and arrest cybercriminals, but it seems like innocent people may be getting swept up in criminal investigations. For example, it’s been five months since Binance froze millions in crypto belonging to 150 Colombian accounts, at the behest of the Dutch Attorney General. Everybody keeps waiting for the hammer to fall, but months pass and there’s no word. Binance has its proverbial hands full, but regulators are bearing down on the Cayman Island-based company.

In January of 2021, Binance was seeing growth skyrocket all over the globe, but 2021 was a year in which crypto criminals experienced a 79% growth in profits to $14 billion, according to Chainanalysis. And Binance was often a beneficiary of those transfers. They were seeing explosive, frothy cross-border financial flows, from Russia and Ukraine to Europe, from Europe and the US to Mexico and Colombia, the general route of illegal drugs reversed.

Riding the adoption wave and doubling down on a profitable market, Binance formed an alliance with Colombian bank, Daviviendra, with operations initiating this past December. Not to worry! Binance was gonna go legit. In the meantime, Binance beefed up its compliance team, thinking “We’ll just hire the cops.” Over the Summer of 2021, Binance made a cattle call for people with government experience, scooping up a few former executives from the FATF, undoubtedly a smart move.

Nevertheless, ominous complaints continued to roll in from financial institutions. In August of 2021, De Nederlandsche Bank announced that Binance was not in compliance with the country’s Anti-Money Laundering and Anti-Terrorist Financing Act. Not a good look. Recognizing that platitudes and double-speak would not assuage Dutch regulators, Binance began allowing them access.

Next, in August, Binance announced an ex-IRS investigator, Greg Monahan to head up reporting, and a month later, in mid-September, Binance hired a former Dutch Europol agent, Nils Andersen-Roed, as director of audit and investigations. According to Binance’s website, Andersen-Roed’s “focus will be on conducting and leading internal and external investigations with the purpose of identifying bad actors that attempt to commit crimes on Binance’s platforms and to protect users’ funds, as well as proactively supporting law enforcement agencies with their investigations.” That seemed to play well with the press, so maybe the legal heat would ease up.

With bitcoin now the most common form of payment for drugs around the world, and Colombian coca producers continuously breaking their annual production records, it’s no surprise that Colombia is ranked fourth in the world for peer-to-peer Bitcoin trading volume. But that is not the whole story. Over half of young Colombians have expressed interest or already invested in crypto, making Bogotá the seventh on the list of top bitcoin cities.

And according to Simon Mejía, a data analyst at Summan S.A.S., Colombians have incentives to invest:

“Many young people in Colombia are not happy with the traditional investment options, so it is now popular for people under 30 to invest in crypto as an alternative where we can get better returns. Some big banks are starting to let you convert your cryptocurrencies to Colombian pesos, so now it is way easier to bring your profit into the country than a few years ago. I have also heard about a few small businesses taking crypto as a valid payment method.”

Imagine: bitcoin millionaire retirees withdrawing their crypto in Colombian pesos from bitcoin ATMs in Cartagena. Won’t it be grand? Maybe not so much for ordinary Colombians who don’t own crypto. And perhaps not for the retired crypto tycoons like the Wormhole hacker, if their crypto fortunes came from illegal means.

“Thank you for using Binance. Your account is currently under review by the Dutch police authorities.” Colombian users were then asked to confirm their identities and provide income verification.

Despite Andersen-Roed’s pledge to “protect user funds,” some users can’t see their balance and have been instructed to contact Dutch authorities. Jairo Andrés Vélez, a Colombian national, was one of those affected by Binance and Dutch authorities’ measures last year. In October 2021, Vélez had 1.8 BTC in his account, but on January 13, after consulting Binance, he was informed there is only 0.0003 BTC in his account. There has been little to no explanation of where that $78,000 has gone.

Translation: “Crypto Friends: I can tell you that Binance has emptied the Wallets of the users whose accounts were blocked. I had 1.88 btc of which 70K was in USD tether and today, I have zero USDT. And Binance gives us no explanation.”

Like Jairo Andrés Vélez, the other Colombian nationals affected in this case are traders from the P2P (Person to Person) market of Binance. And like Vélez, none of the other users have been accused of or admitted to involvement in illicit activities. Whatever the problem is, Binance didn’t want to reveal any details; one message in Spanish lamented “we can’t share any specific details at the moment. If there were any information we could share, we would do so without a doubt.”

It’s not clear the crypto they held in their accounts was ‘clean.’ Given Binance’s minimal effort in the KYC (Know-Your-Customer) and AML (Anti-Money-Laundering) department, it is very possible criminals have used the platform to launder money through the P2P market, using crypto mules and nested exchanges.

Tracked by law enforcement, this money then ‘contaminated’ an unassuming trader’s account, who inadvertently ‘cleaned’ dirty money, which led to them being frozen and confiscated. However, those who speak out will likely receive more scrutiny, so we must consider that the complaints of Jairo and others obstreperously protesting might be legit, or at least, unwitting collaborators.

South of the border, Latin American governments don’t have a regional strategy to combat this form of money laundering. Mexico passed a Fintech law last year, which mandated the disclosure of large transactions, leading to some arrests, but Mexico was alone in tackling this problem. Until Colombia passed an analogous law on February 7, 2022.

Colombia and Mexico, two of the countries with the most powerful drug traffickers in the region, are leading the way, but other Latin American governments need to update their laws, lest they be used as proxies by Mexican and Colombian criminal groups.

At Binance, the compliance department seems to lumber behind the business development team, and their hiring strategy is reminiscent of the criminal defendant who hires the former prosecutor for their defense, which often seems to work. Regardless, the messaging of Binance is on point, for which Binance hired Chief Communications Officer Patrick Hillman, a GE and Edelman alum, late last year. This was reportedly part of the firm’s “evolution into a global financial institution,” according to Binance’s blog.

Faced with a legal crisis, Binance snitched on the individuals and companies that were previously inflating volume with illicit funds and turning Binance into a cash cow. Then, the company’s communications team would go to work, publishing compliance puff pieces on its blog. Then, Binance turned around and asked for thank-you notes from law enforcement, which it would then plaster all over its blog, declaring “At Binance, we are proud to have a strong track record of assisting law enforcement agencies around the world.” Prescient words.

The outreach of Binance to the FBI, the Secret Service, and the IRS got on the last nerve of higher-ups at the Justice Department, prompting an unusual order to those three agencies demanding they stop signing Binance’s chummy letters.

With trouble brewing on the regulatory front, Changpeng Zhao, the founder and CEO of Binance, and his executive team hastily rebranded Binance’s blockchain network, the day before the SEC investigation was announced. Binance Chain and Binance Smart Chain will now be known as BNB Chain, perhaps in hopes of avoiding the scandal engulfing their parent company.

However, Binance is taking on its money laundering problem head-on by hiring former government regulators and partnering with TRM Labs, a well-known crypto compliance and risk management firm, using its Chain Analyzer to identify and expose nested exchanges.

For Binance, it may be too little, too late, unless it can efficiently offload CZ and his legal problems. If any Binance employees are interested in collecting their own “white hat” bounty, they might consider offering any and all evidence of financial malfeasance to the SEC, which now stuffs money in the pockets of whistleblowers, up to 30% of the recovered funds when monetary sanctions exceed a cool million bucks. CZ will get his golden parachute, why shouldn’t you?