Is London ready for DeFi? 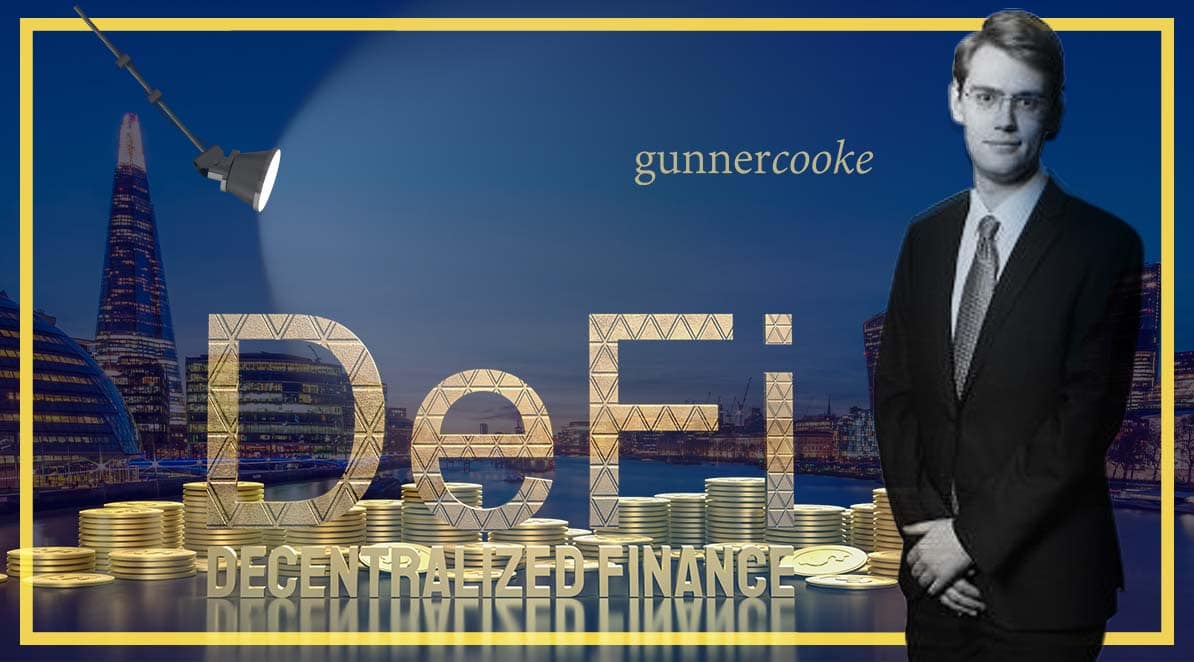 Now that Crypto has gone ‘mainstream’ its almost like the industry released a collective sigh of relief. Crypto went through its ‘Napster’ moment back in 2017 when the rise of the Initial Coin Offering (ICO) stole the show, for a while. Many of us thought that cryptocurrencies would go mainstream back then. Alas, it was too early.

Even as the ICO bubble was diminishing, concepts like Tether’s Stable Coin and Decentralised Finance were starting to gain momentum. Ethereum’s revolutionary programming language enables any application to be written on top. ‘Programmable money’ is the term used by many enthusiasts:

“Anyone can program logic into payments. So you can get the control and security of Bitcoin mixed with the services provided by financial institutions. This lets you do things with cryptocurrencies that you can’t do with Bitcoin, like lending and borrowing, scheduling payments, investing in index funds and more.”

One of the reasons that cryptocurrencies and their eco-system can seem so complicated, is the sheer amount of different ‘altcoins’, or virtual currencies other than Bitcoin. Many of them were created in the runup to Christmas 2017, others like Bitcoin Cash came about as a result of the forking of Bitcoin, also in 2017.

Some observers trace the history of DeFi to 2017, when Andy Milenius announced the ‘First Dai Release’ coming up in December 2017:

Since the introduction of Dai, a host of companies and communities have flocked around the project. Most of these players are Ethereum enthusiasts, but many of them are from or located in the U.S. Or they might hail from Canada like Vitalik Buterin, Denmark like Rune Christensen, India like Samyak Jain, Finland like Stani Kulechov or, in the case of Chef Nomi from Sushiswap, we may never know.

With so much of the DeFi space being developed in the U.S., many of the leading figures and tokens have based their operations there. But are there any regional ‘hubs’?

Israel was in the space early, as was Japan, but Ethereum is not as popular outside the U.S. with both Israel and Japan more inclined toward bitcoin-based solutions. Singapore is another likely market to consider, with a huge fintech startup community. Not to mention Dubai.

What about the UK?

DeFi on the Thames

Last week Ron Kalifa OBE played down the use of ‘Fintech’. He believes that ‘Open Banking’ is what the UK is truly good at, where it is a market leader. The listing of Wise (formerly known as TransferWise) and the recent valuation of Revolut tell their own stories, both firms are leaders in Fintech.

DeFi may not have filled as many hours of discussion as Open Banking or Payments at Fintech Week London last week. But, there was no way the organizers could leave it off the agenda. Most of the speakers were not from the UK, but that doesn’t mean that there are not companies in this space operating in the UK.

As a topic, DeFi appeared on the agenda at Sibos 2019 in its current form. Sibos is the world’s premier financial services event, based out of London. Topics raised at the event help to form the direction of UK fintech. This years agenda isn’t out yet, but you can expect to see more than one panel about the future of DeFi when the agenda is published.

Recently, a story caught the attention of our editorial team:

While most exchanges around the world are trying to move off manual processes, DeFi has reached the heart of the City of London. Fellow Level39 members, AllianceBlock have been making waves in the UK for several years now. And they are not the only firm in the DeFi space that is involved with stock exchanges in London:

Aquis is an exchange that you may not hear about every day, but it’s as good a place as any for Dispersion Holdings to start their journey in London.

Still not entirely convinced that DeFi has come to London? Perhaps Blockswap can convince you:

With the increased interest in London as a hub for DeFi players, we reached out to James Burnie, Financial Services & FinTech Partner at gunnercooke who shared his insights.

“We have seen an increasing interest in DeFi, and this is driven by a range of factors.” James suggests.

“Where projects are aimed at operational robustness and facilitating transactions, then they tend to slot within the existing regulatory structures. However, where DeFi is seen as a way of disapplying the regulatory system, then these projects tend to be ill-fated. It is going to be difficult to persuade mainstream finance and regulators of the virtues of trying to override the systems of controls and checks in place to protect the public.”

James contrasts DeFi with how ICOs work: “It is worth contrasting DeFi with ICOs. The ICO market started off being vibrant, with a range of new tokens being offered. However, bad actors undermined trust in the value of tokens being created this way, and so appetite for this type of investment has declined. This is despite the fact that there are some really good projects that originated with an ICO.

“DeFi currently has the same buoyant vibe that the ICO market had, and the question is whether or not in 5 years’ time this will continue, or whether it will be undermined by bad actors.”

Called ‘the gamification of finance’ by some, James believes that education is needed to help protect DeFi: “We are seeing increased interest in crypto from traditional financial institutions, in particular as an alternative means of making higher risk / higher reward investments.”

“However, there is a fear, and in particular a fear of the unknown. And, whilst financial institutions feel that they cannot quantify and mitigate against the risks of crypto and DeFi, they will be cautious about getting involved. Education is important therefore in terms of providing the comfort needed for financial institutions, to feel they can support DeFi. This is important because, whilst crypto and traditional finance are sometimes seen as competing forces, if crypto is to go mainstream, it will need to meld with existing financial infrastructure.”

James continues by adding how self-awareness is also required, “There is a distinction between better and perfect.

“DeFi models may well be better than existing infrastructure, for example in terms of reducing cost and increasing robustness. This does not mean that they will be perfect, and an acceptance of that when dealing with regulators and clients changes the nature of the dialogue.

“Instead of having to pretend that DeFi creates some kind of perfection, which will not be believed, the focus becomes why the DeFi solution is better than the existing solution. This is a much lower bar to clear to obtain acceptance, and just as potent in terms of getting interest.”

Supporting DeFi as a law firm

DeFi is different to more traditional finance, in that there is less likely to be a pre-existing process that can be followed. The risk in setting up a DeFi project is also greater, as there is not the same comfort that what has been done before can be done again..

James explains how the first question for any crypto or DeFi project is always the same: “is this legal?”

“Once that is determined, the rest of the project will fall naturally into place. As such, the main driving force behind the ability of a law firm i to assist with crypto and DeFi will be its regulatory capability.”

Returning to how he works with companies in the DeFi ecosystem, James continued:

“The key point we look for is the extent to which a DeFi solution mirrors an existing system. If it does, then in order to gain credibility the look and feel of the DeFi system should be of at least a similar quality to the existing infrastructure.

“As such, how you deal with the traditional players will be the natural starting point when dealing with a DeFi project. That being said, it is important not to simply assume that a DeFi project is the same as traditional infrastructure, and care has to be taken to appreciate the specifics of the DeFi project.” James adds.

When looking to the future, James believes that DeFi still needs to convince the world that it is a credible basis on which to operate. Hopefully it will do a better job of it, than ICOs have.

Find our more about DeFi in our recent story about how Oracles operate within the DeFi eco-system.