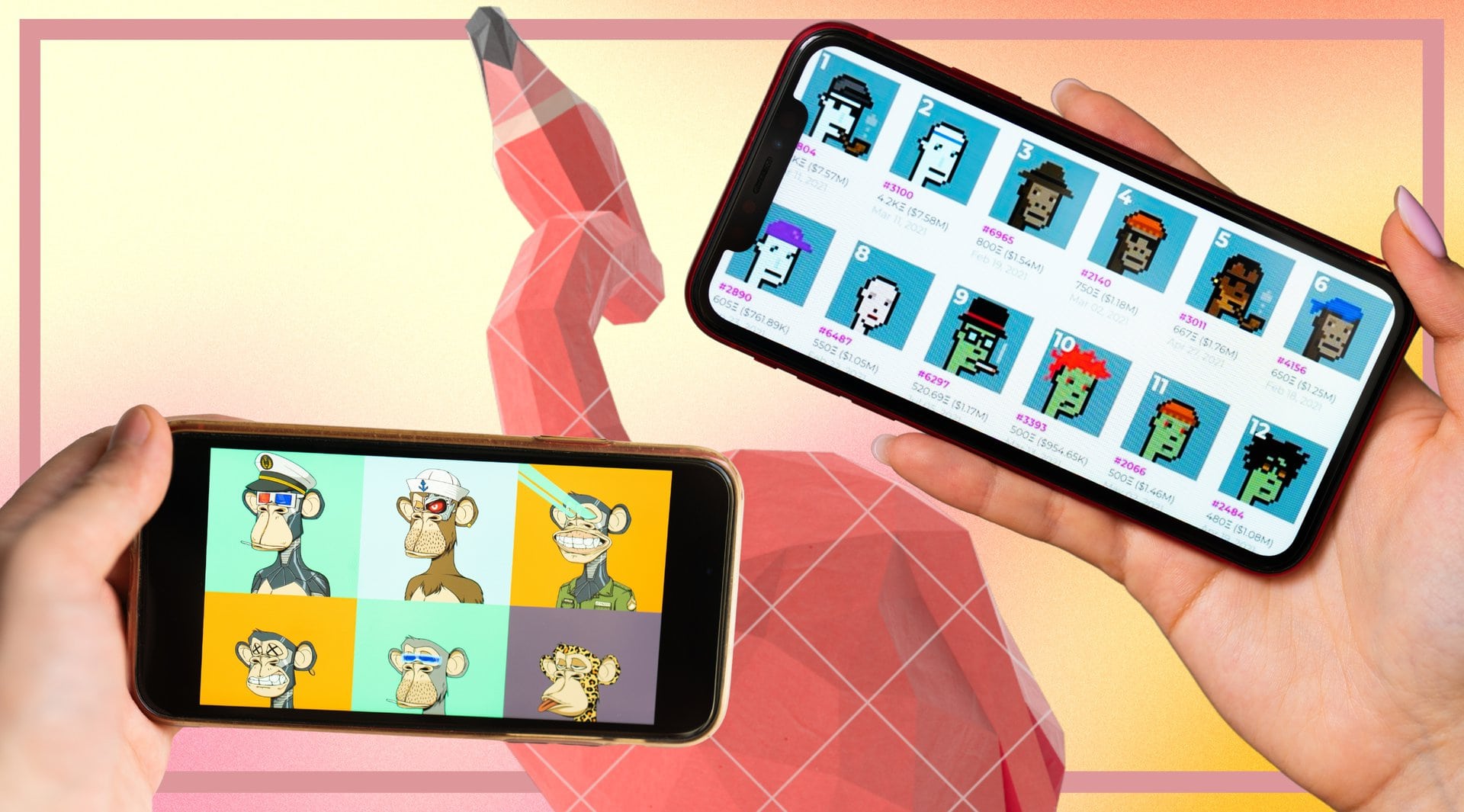 In February, Forbes announced that Aaron Wright and Priyanka Desai, the founders of Flamingo DAO, an LLC located in Delaware, had turned a $10 million investment into a $1 billion NFT collection. However, since the NFT crash, Flamingo has kept mum about the value of its holdings.

NFTs introduce scarcity into the digital property space, but their market value greatly depended on high levels of trading activity, emphasizing that scarcity. After the crash, even with wash trading to paint a false picture of a hot market, the hype has been unsustainable.

For the art world, NFTs presents an opportunity that has been impossible heretofore, introducing potential collective or fractional ownership and tokenization. For Flamingo, the question now is whether this property is valuable, and if so, how much is it worth?

Origins and Side Gigs in the Ecosystem

Flamingo is a Decentralized Autonomous Organization, or “a subreddit with a bank account” for NFT ownership built on the NEO chain that uses Perps, or perpetual contracts for trading. Referring to themselves on Twitter as “the Medici’s of NFTs,” Flamingo is one of the most exclusive DAOs.

Flamingo’s 100 members are accredited investors and together they collectively own some of the more prestigious NFTs, including 22 Bored Apes and 218 Crypto Punks, worth around $20.5 million. They’ve also invested in projects, like OpenSea, the largest NFT marketplace.

Flamingo brings the collaborative ‘hive mind’ from the world of DAOs to the market of NFTs. Because of the diverse experience of the members, this collective has a unique viewpoint of the technology side within the DAO space, so they’ve made several VC investments in new projects.

The founders behind Flamingo are both attorneys involved in a plethora of other ventures. They founded Tribute Labs, formerly OpenLaw, which helps DAOs comply with U.S. law.

Flamingo was formed by The LAO, another investor community that serves as a DAO incubator. According to Priyanka Desai, The LAO has done all the paperwork to make sure everyone is protected. The LAO is to NFTs what Coinbase is to crypto – the company that has gone to the trouble to comply with the law.

Flamingo shares founding and early members with various sister DAOs, such as NeptuneDAO, NoiseDAO, and NeonDAO.

Flamingo’s members all post a buy-in of 3,000 ETH ($367,500), which grants them voting rights denominated in “Flamingo units.” The buy-in amount has multiplied 50 times from just 60 ETH in the early days. However, as the value of ETH crashed, so has the dollar-value of the membership buy-in, which was worth $8 million back in February.

Derek Edward Schloss, one of the founders, told the Art Sense podcast that the members of Flamingo are a collective of venture investors, art collectors, and owners of galleries. Members may lend, hold, or display the NFTs in galleries. They can also use them as collateral in other DeFi platforms.

If members disagree with the direction of the collective, they can take their toys and go play in another sandbox, which is called ‘rage-quitting‘ in Flamingo vernacular. The members can also vote to wind down Flamingo if a majority of the members vote to dissolve the partnership or transfer all of its assets to another entity.

As of February 2022, the collective had amassed 7,920 ETH in its treasury. As of writing, the treasury boasts 20,211 ETH, which is around $24.2 million dollars at current price levels, of which there is 0% remaining.

NFT investors often prioritize the hype around NFTs over the quality of the art, but Flamingo uses the input of its hive mind of experienced members to hone its investment strategy.

Don’t get me wrong, the NFTs are really cool looking, but between the gimmicky titles and the rather prosaic designs, I wonder if this collection is more hype than substance.

Flamingo’s collection seems to have a modernist bent. The members seem to favor abstract and geometric, rather than representational pieces. Although their most famous works are Bored Apes, a lot of the other works are much more Art-forward and much less fad-driven.

Looking at the variety of NFTs uploaded to Gallery.so, there is a wealth of postmodern representational and impressionist works that incorporate graffiti, anime, goth, and sci-fi elements in ground-breaking ways. However, the members of Flamingo are likely unimpressed with some of the garish pop works that characterize contemporary digital art.

Flamingo purchased a “super-rare” Alien Crypto Punk NFT in 2021 for $750,000. Crypto Punks was launched in 2017, and they were the first NFTs. The Alien Punks were 9 out of ten-thousand Crypto Punks, later dubbed by Christie’s as the beginning of the CryptoArt movement.

Desai told The Defiant that the community was trying to decide whether to DAO-ify it, fractionalize it, or perhaps give it a personality as a digital avatar. It seems as if the community chose the latter, by giving it a social media account so it could promote MUSE0, the internet museum. To be fair, the Alien Crypto Punk has more followers than I do, but it hasn’t tweeted since the NFT crash, which is telling.

What are they worth?

Before the NFT crash, Flamingo started commissioning other digital works and curating its works for digital museums and gallery shows. Since the price slump, there have been few articles about Flamingo, but they have not stopped buying NFTs.

However, since the NFT crash, in which the trading volume of NFTs slumped from $17 billion to just $466 million and sales volume fell 77% from Q2 to Q3 of 2022, the future of the market is uncertain.

According to Chainanalysis, NFTs have seen the largest decrease in the activity of all DiFi categories.

The drop in trading volume was accompanied by a stunning 88% drop in the number of addresses transacting on NFT marketplaces, according to Chainanalysis. And like other assets in the Web3 space, there is a ton of market manipulation.

As an example, looking at the trading volume charts from Dune Analytics, one can observe how the market peaked and is now in a doldrum.

That’s not good news for many deep-pocketed investors, so they want to cover it up with wash trading, which we can observe by separating the authentic trading volume from wash trading, as seen below.

Above, it shows that wash trading made up anywhere from 30%-50% of trading activity in the second half of 2022. Here’s another view. 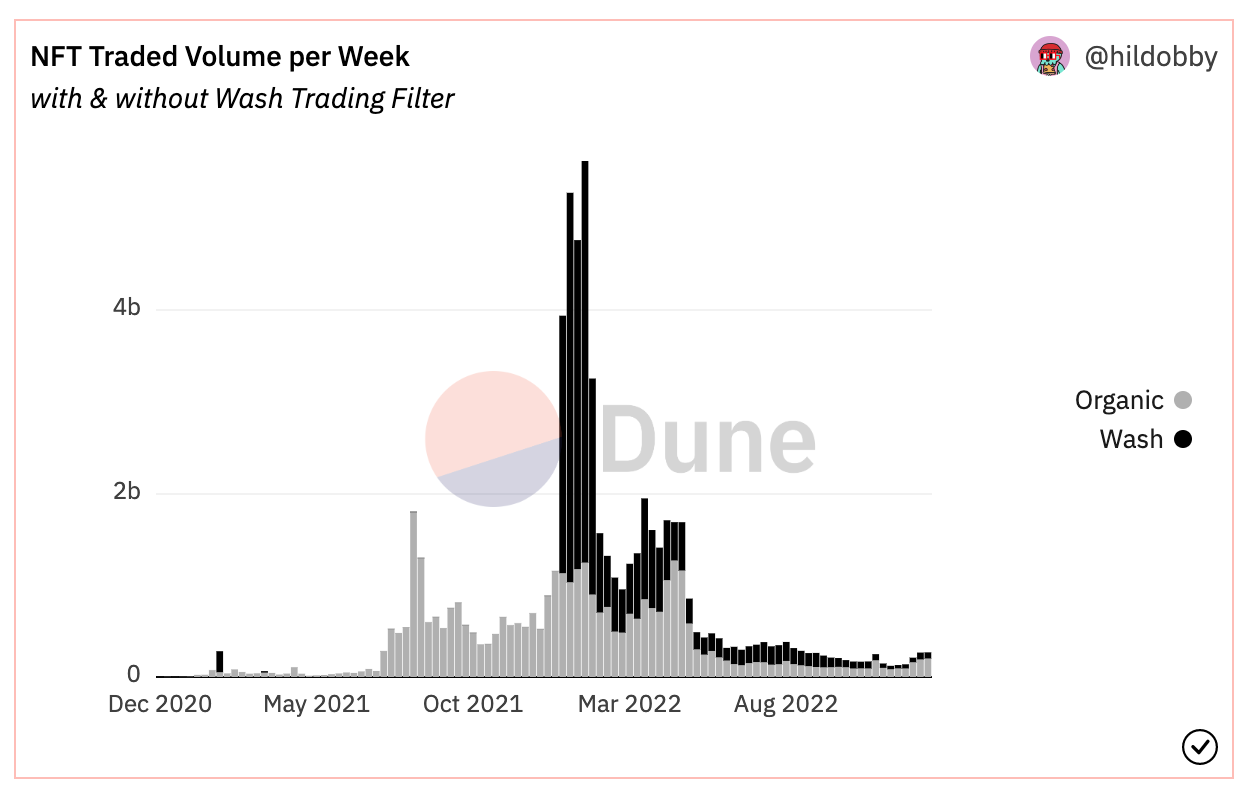 Even the peak of the market was made to look more dramatic, and that illusion has continued. But these real losses in volume have not been lost on market observers who have pointed out how much the floor fell out of this previously hot market.

As an example, OpenSea, the main marketplace for NFTs and one of the investments of FlamingoDAO, lost 99% of its daily action – going from $405.75 million on May 1 to $5 million on August 28.

In January, OpenSea bagged a $13 billion valuation. Today, market analysts are at loss to estimate the damage, but OpenSea’s shares have been trading at a 75% discount.

As a sign of how much the market for NFTs has caved, “Unsellable,” a new service for these distressed assets has launched, allowing investors to offload them at fire sale prices and write them off as tax losses.

Whereas FlamingDAO bet that these assets were the future, Unsellable bets that NFTs are “likely to continue to be worthless.” Their website proclaims “Sell Your Worthless NFTs, Harvest the Losses.”

So far, Unsellable has racked up a collection of 5,000 NFTs.

Meanwhile, Yuga Labs, the creators of the Bored Ape Yacht Club (BAYC) are being sued. The lawsuit names as co-defendants various celebrity shills who touted BAYC for hidden payoffs, including but not limited to Steph Curry, Kevin Hart, Madonna, Jimmy Fallon, Justin Bieber, Paris Hilton, and Serena Williams, DJ Khaled, and Gwyneth Paltrow. Even Adidas and Universal Television are thrown into the mix as co-defendants.

The 95-page fraud complaint states, “The truth is that the Company’s entire business model relies on using insidious marketing and promotional activities from A-list celebrities that are highly compensated (without disclosing such), to increase demand of the Yuga securities by convincing potential retail investors that the price of these digital assets would appreciate.”

Given that the BAYC is one of the flagship projects of the NFT marketplace, this lawsuit is a powerful shot across the proverbial bow.

The Flamingo View of the Future

Six months after NFTs crashed, Derek Edward Schloss, partner at Collab+Currency and an investor in Flamingo, remained bullish, telling ZenAcademy, “Flamingo has never actually sold an NFT before. We recognize that we’re not going to get it right every time. We are a special collective of brains that has come together to try and grok what is happening, but we can’t tell you with specificity that we need to exit our CryptoPunk position at 5 ETH because we don’t know if it’s actually going to 10 ETH or 15 ETH or 60 ETH or 100 ETH. What we do have is conviction on is that a number of these assets, many of which we are investing in are going to be globally recognized and very important assets both as collateral, but then also as culturally and historically significant works, whether that’s art or it’s collectibles or some hybrid or membership passes or whatever it may be. We know that just with power law returns and how the world shakes out around investable asset classes, a number of the things we invest in are going to go 100X, 500X, 1000X.”

Rose may be right. Rumors of the death of NFTs may be greatly exaggerated, especially considering that someone recently sold a CryptoPunk for $4.5 million. Cryptocurrencies have been volatile while investors alternately piled in and panicked, but NFTs have seen multiple booms and busts just during 2021, and nobody knows where the market is going.

Kevin Rose, co-founder and CEO of PROOF and an investor in Flamingo, may have summed up the ethos of many of Flamingo’s members, who if they haven’t already rage-quit, are buckled in for the long haul.