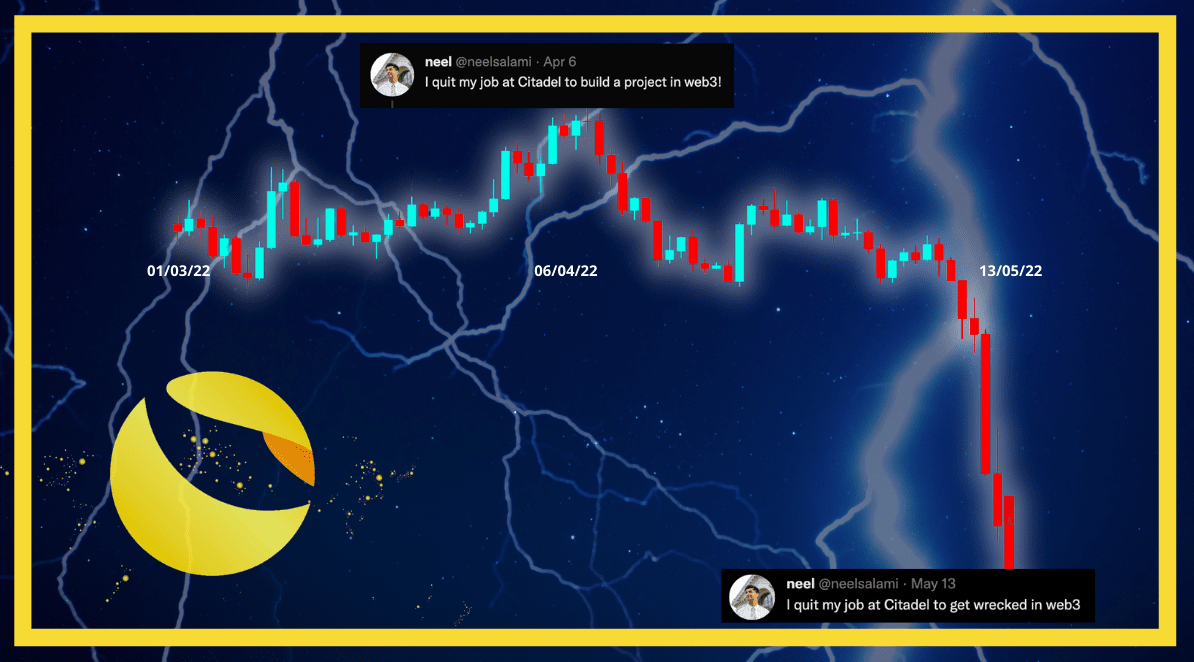 Perhaps the biggest crypto story of the year so far is the collapse of Terra ($LUNA). Until a crash last week took over 99% off its value, the coin had been in the top ten most liquid cryptocurrencies, achieving an all-time high in April of $119.51.

$LUNA nosedived once its sister token, stablecoin TerraUSD ($UST), de-pegged from its $1 value after investors began to dump high volumes of UST on markets. LUNA and UST markets are strongly related, as traders are able to swap a unit of LUNA for a unit of UST, and vice-versa.

TerraUSD is a decentralised algorithmic stablecoin, so it is not backed by any underlying asset. Theoretically, Terra maintains the $1 peg by creating new coins, or destroying old ones, to control supply and keep the price steady.

Because of the speed at which UST was being dumped, this mechanism failed, and the peg could not be maintained. In turn, this caused LUNA to collapse. The mass unloading of UST meant the supply of LUNA was massively increased, causing the value to drop quickly and dramatically. At one point, LUNA reached a low of $0.00001675 – a drop of 99.9999% from its all-time high. At time of writing, the coin is trading at $0.0002347 and is all but dead as a major cryptocurrency.

The collapse sent shockwaves through other crypto markets, including that of Bitcoin, and has also raised wider fears about the future of decentralised finance (DeFi):

Spare a thought in all this for Neel Somani. Formerly a quantitative researcher in the commodities group at Citadel, Neel took a huge pay cut to join Terra. He started his role in April, just weeks before LUNA’s rapid demise would begin. Neel told DisruptionBanking that he quit “primarily because I believe in the mission of crypto and decentralised finance.” He joined Terra to work on building an Ethereum Virtual Machine (EVM), meaning “people would have been able to run the code that they originally wrote for Ethereum on Terra instead.”

“This would have accelerated the growth of Terra and created additional use-cases for $UST, that could have prevented the collapse,” Neel added. But he didn’t get there in time.

Neel seems to have seen the funny side of this, and is taking his fair share of mockery from friends on Twitter. One pointed out that he had actually previously highlighted himself how the algorithmic stablecoin could fail to maintain its peg. In a blog post, Neel said “history will view algorithm stablecoins as either a) a disaster as inevitable as the subprime mortgage crisis or b) the greatest recent innovation in financial history.” Presumably we now have our answer.

Neel told us that he “recognised the risk of $UST de-pegging, but thought that we would have enough time to build the necessary network effects to prevent it from occurring.” However, the mass dumping of $UST came too early for this to happen, and the network’s flaws were exposed. Neel explained how this played out last week:

“Long-story short, the way that Terra makes sure that $UST trades at exactly $1 is that if $UST ever rises above a dollar, Terra sells $UST (increases supply) in exchange for $LUNA. It then burns that $LUNA.

“If $UST falls below a dollar, the reverse process occurs and the system buys back $UST and creates more $LUNA.

“So if $UST falls far below a dollar, then any rational investor who understands this mechanism will see that the price for $LUNA is going to fall by quite a bit. So the rational investor sells their $LUNA and $UST, the system has to mint even more $LUNA, more people sell, and ultimately the system fails.”

When it comes to $LUNA, Neel thinks the crypto is completely dead. Having joined only a few weeks ago, he has already moved on from Terra as he sees no prospect of a recovery. “There is no way for $LUNA to recover in its current form,” Neel said. “I’m working on an entirely new project now.”

Reflecting on his (short) time at Terra, Neel noted that the episode “certainly does highlight the risks and rewards with crypto.” He hopes that any regulation which is brought forward in light of this will be “sound,” but said that “historically it has been misguided.” Because of this, he suggested that “it might be on the crypto industry to figure out how to properly communicate risks to retail investors.”

We ended by asking Neel whether he regrets his decision to leave Citadel at all. He chuckled and responded “not at all […] I’m super grateful for my experience and excited for what’s next.”

Despite the painful Terra experience, Neel added that he remains “very bullish on crypto” and is “excited to continue building in the space.”