Gordon Brown and the strange war on Iceland 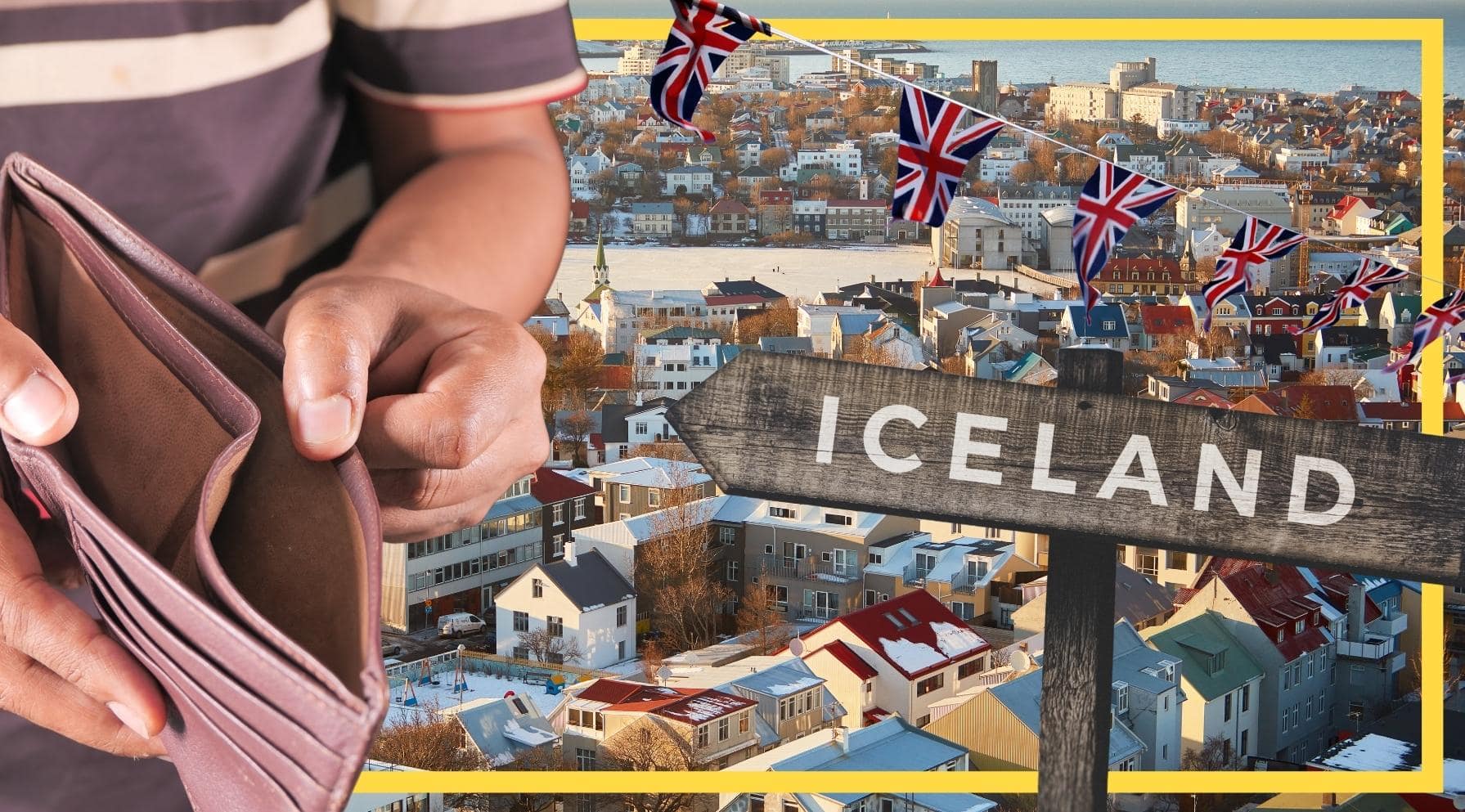 What do politicians always do to distract from their own failures and incompetence? The answer is obvious – blame someone else. Preferably someone significantly smaller than them, who they can bully without much fear they’ll face any real consequences for doing so. It would, of course, be more than possible to write a thick, multi-volume book full of such examples – but one of the most outrageous in modern times was perhaps Gordon Brown’s strange (and somewhat pathetic) attack on the country of Iceland during the 2008 financial crisis.

Like almost every country in the world, Iceland suffered badly in the aftermath of the 2008 crash. Partly this was its own fault: the Icelandic Central Bank failed to provide banks with sufficient amounts of liquidity when cash became harder to access on markets, the government seemed paralysed by the crisis and struggled to take decisive steps, its national regulator hadn’t been supervising the banks properly and, quel surprise, bankers’ greed had exposed the financial system to huge systemic risks that weren’t managed adequately.

Two of the country’s three biggest banks – Glitnir and Landsbanki – quickly went into administration. Only Kaupthing, supported by 500 million euros from the Swedish Riksbank and a further 500 million from the Icelandic Central Bank, remained standing. This is where Gordon Brown comes into the story, as Kaupthing had a significant presence in the UK.

This is because the Icelandic bank operated a popular online deposit programme in the UK called Icesave, offering interest rates that were significantly higher than the domestic retail banks like Lloyds and TSB. However, the bank’s UK operations were run through a UK-registered company – Kaupthing Singer & Friedlander Ltd (KS&F). This was regulated by the Financial Services Authority (FSA) like any other finance firm in the country. To all intents and purposes, despite its Icelandic origins, KS&F was essentially a UK bank.

But as Iceland started to go under, and the UK itself was having massive troubles as the system began to collapse, the British government decided to start a fight with Iceland. Cynics might say that as the country verged on the edge of a run on the banks, complete financial breakdown, and a general election, Brown decided to try and playact as a tough guy. Perhaps after a decade of playing second-fiddle to Tony Blair, he thought the limelight was finally his: that having a pop at Iceland could be his Maggie Thatcher “Falklands Moment.”

Rather than bombing Icelandic warships, though, Brown’s form of warfare was to insist that all Landsbanki deposits should be guaranteed by the Icelandic government. KS&F was a UK company, so the entire operation should’ve been covered by the measures taken to save the banks from collapse, including the depositor protection scheme. Indeed, the bailout package came at a total cost of over half a billion pounds to British taxpayers, so doing so would hardly have made much difference. But Brown, and his Chancellor Alistair Darling, argued that guaranteeing Landsbanki customer funds was Iceland’s responsibility. Under Icelandic law, though, deposits could only be guaranteed up to a maximum of £15,000. Anyone with more than that in Landsbanki was set to lose thousands, and indeed, some did:

The Icelandic government – though surprised that the UK government decided to go down this path – was adamant that discussions were underway about how to guarantee total deposits. Numerous meetings took place between the Chancellor and his Icelandic counterparts. However, completely blindsiding Iceland, Darling suddenly made a public announcement stating that: “the Icelandic government, believe it or not, have told me yesterday that they have no intention of honouring their obligations here.”

For Kaupthing, this was disastrous. The FSA forced KS&F to sell their online deposit business to ING Bank. The government also opted to freeze Icelandic assets in the UK, including in industries completely unrelated to Kaupthing or finance. As this move was done under Anti-Terror Laws, the country of Iceland was essentially put on the same level as the Taliban or Al-Qaeda.

This inflicted huge reputational damage on Iceland, whose markets lost any remaining credibility. The Icelandic Krona collapsed, and the foreign exchange market had to shut down. This made servicing foreign debt even more difficult and expensive, and pushed the country even closer to the precipice. Businesses struggled to secure foreign currencies, needed to import food and medicine. The International Monetary Fund (IMF) was summoned for a rescue package.

Brown and Darling’s agenda was obvious. The UK was in meltdown and they needed to scapegoat someone. While it would be difficult to pin the blame for 2008 on a single country, Iceland probably wouldn’t be near the top of the list. You might start with the United States, with all its sub-prime mortgages and Lehman Brothers. You might look at the UK and the Bank of England; the City had totally embraced low interest rates and cheap money, which fuelled the speculative and high-risk investments in international debt markets. If you were being very ungenerous, you might even look to specific people, like Gordon Brown, who was Chancellor for ten years before becoming prime minister and claimed to have “abolished boom and bust.” What is for sure, though, is that Reykjavik was hardly the epicentre of all the chaos, despite what Darling might’ve made out.

What is particularly infuriating about this episode is that Iceland proved to be much better than the UK (and indeed the US, or Ireland, or practically anywhere else) at actually holding its bankers to account. In the aftermath of 2008, 26 bankers and financiers have been sent to prison, serving terms as long as 5 ½ years. The CEO and Chairman of Kaupthing were imprisoned, as was the CEO of its Luxembourg operation, as was the bank’s second largest stockholder. This was in relation to market manipulation and fraudulent activity.

Compare this to the UK, where the Serious Fraud Office was unable to bring charges against real estate magnates Vincent and Robert Tchenguiz, who were implicated in the Kaupthing fraud – and then had to pay them £4.5 million in damages for “malicious prosecution!”

The UK also had the Neil Woodford scandal, who ripped off pensioners with money tied up in his Equity Income and Income Focus funds. After concerns the funds were performing poorly, many tried to redeem their money but he was unable to raise enough cash to service this. Dealings were suspended – but he managed to make £8.7 million in the immediate aftermath, despite apparently being unable to give pensioners their money back. The FSA was slow to react and established platforms like Hargreaves Lansdown continued doing business with him. Were Gordon Brown and Alistair Darling really in any position to lecture Iceland about financial irresponsibility?

Perhaps because Iceland has remained outside of the centralised European Union project, it is able to hold its politicians and bankers to account much more directly. It is a small, island nation where people are able to protest, peacefully and democratically, more effectively. The contrast between Iceland and Greece or Cyprus, who had bailouts imposed on them by foreign technocrats, is stark. Even the super-rich have found that financial injustice remains in Europe: like those who have found they have no legal rights to their assets registered in Liechtenstein. But in Iceland, while some lingering concerns over crony capitalism do remain, people power and insurgent political movements have been able to secure real banking sector reform – at time when Europeans and Americans wonder if much has really changed at all.

This tale offers two further lessons. The first is that there will be no statue of Gordon Brown in Reykjavik; no young Icelandics called “Gordonsson” running round the fjords of the North Atlantic. Perhaps former Icelandic President Ragnar Grimmson put it best when he said: “Gordon Brown will be long remembered in my country for centuries to come, long after he has been forgotten in Britain.”

But more importantly, this episode shows to what lengths politicians will go to avoid responsibility for their own failures and their own mess. It shows the damage they are prepared to do and the chaos they will wreak in the hope of winning a few extra votes at an election. We shouldn’t let them get away with it.