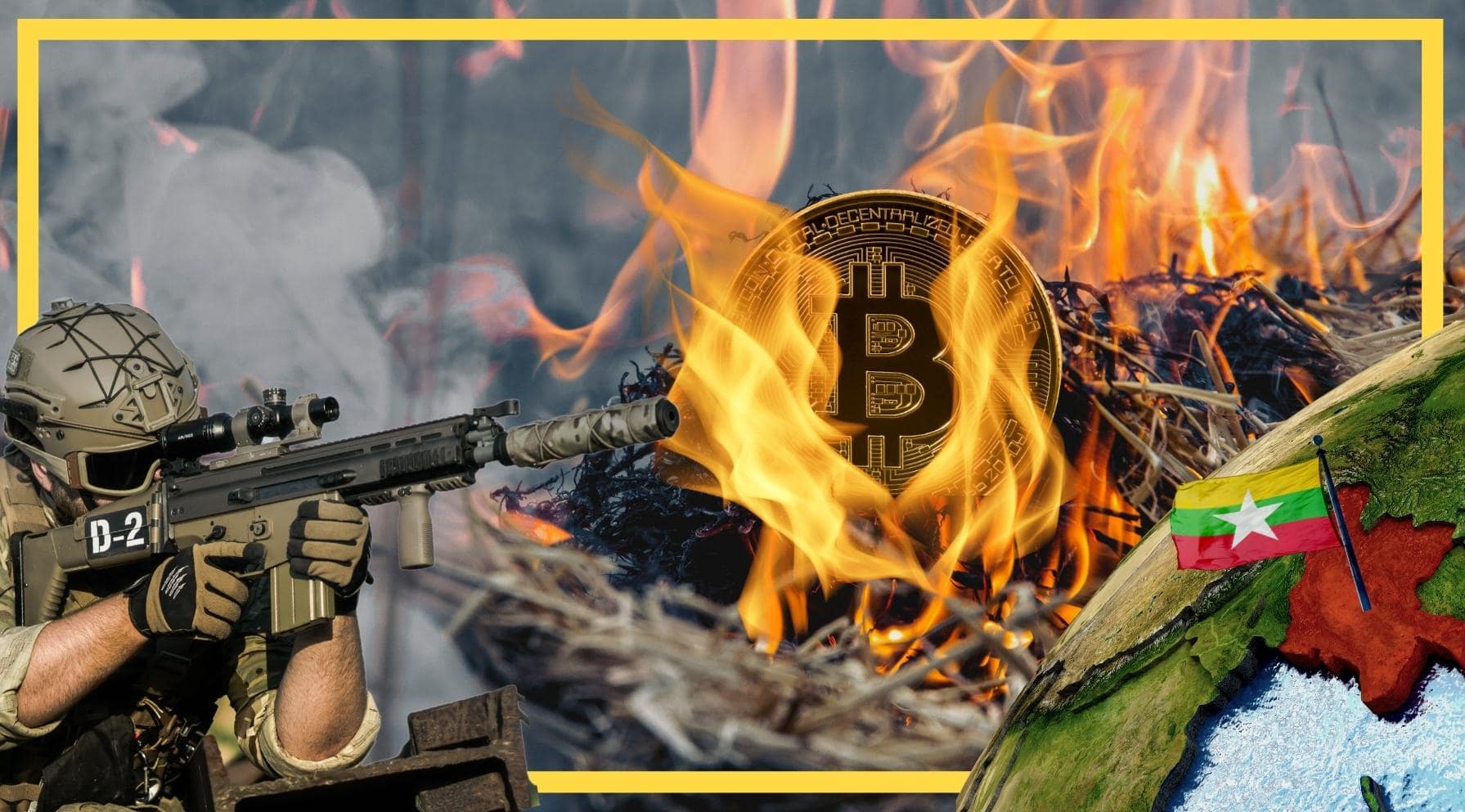 The military government in Myanmar, having come to power following the coup of February 2021, has announced heavy criminal sanctions for citizens found to be using crypto or virtual private networks (VPNs).

As outlined in a bill presented to government ministers, anyone using an unlicensed VPN could be punished with up to three years in jail and a five million Kyat ($2800) fine. Those engaging in crypto activity could be sentenced to up to a year in prison and a similar fine. There are also new obligations on Internet providers to share records demanded by the military authorities. Some pro-democracy campaigners have suggested that is part of a wider crackdown on human rights and individual liberties in the country.

Myanmar’s government-in-exile, ousted by the military coup, has been encouraging its supporters in the country to use the stablecoin Tether (USDT) to conduct economic activity outside the purview of the government-controlled Kyat. Stablecoins, which are fully backed by US Dollars, have also been considered a more attractive alternative for those seeking to hedge themselves against the depreciation of the Kyat. Myanmar’s national currency has weakened by as much as 30% against the US Dollar since the coup of last year.

Blockchain-based financial products have also been used the government-in-exile (GIU) to circumvent military-controlled finance structures and thereby receive funding. Tin Tun Naing, the shadow finance minister, announced in December that Tether should be used to “speed up the current trade, services, and payment systems.” In essence, the GIU is using crypto to construct a parallel financial system that allows citizens, via the blockchain, to transfer funds to and support the alternative government in a decentralised and anonymous way.

This move is part of the GIU’s financial warfare on the Burmese military government. Tin Tun Naing recently raised $9.5 million in just 24 hours from selling “Spring Revolution Treasury Bonds.” All funds raised will reportedly be used on efforts to topple the junta. The shadow government has also warned it will not honour debts owed to the military government if it retakes power in an attempt to deter foreign companies, banks and governments from engaging with the junta. The government-in-exile has also suggested that pro-democracy supporters in the country should withhold tax payments and boycott junta-linked businesses. Western social media giants like Meta have been helping them in this endeavour. For their part, China has been accused of helping to support the military junta, recently resuming imports of heavy rare earth minerals which will allow more profits to flow to junta-backed militias. The military government has also struck a deal with China that makes the Chinese yuan (CNY) the official settlement currency for border trade, helping to stabilise the junta’s access to CNY and foreign exchange.

But is this move to ban crypto activity more than a simple tactical one; an attempt to stifle enemy funds? Or is it symbolic of a wider crackdown on individual liberties in Myanmar? Hanane Boujemi, who specialises in regulatory and legal frameworks specific to the deployment of blockchain technology, told DisruptionBanking that with “blockchain development and the democratisation of financial services” comes “more general access to information and resources.” As a result, “decentralised structures” like the blockchain potentially represent a threat to authoritarian governments like the Burmese junta, whose authority is dependent on centralising power through force.

“How to help people make good use of the blockchain, so they can overcome certain challenges – lack of access to certain structures, the mechanisms of certain governments – will be crucial to ensuring people benefit from new technologies,” Hanane added.

Walid Al-Saqaf, a lecturer in media technology who has researched how blockchain technology can improve press freedom, agreed. He told DisruptionBanking that he was “not surprised to see authoritarian regimes clampdown on crypto.” After all, “blockchain technology can help activists evade some forms of repression by authorities that control online content […] decentralisation and immutability allows the distribution of censorship-resistant content.” In terms of economic control, he also pointed to the fact that the blockchain allows citizens “to send money directly without intermediaries or high fees. This is particularly useful in crises and where recipients have no access to legal documentation or bank accounts.”

The motivations for Myanmar’s military government banning crypto are twofold. It is firstly a straightforwardly practical measure – an attempt to stifle the GIU’s access to the funds which it requires to keep its opposition alive. Perhaps more profoundly, it is an attack on the decentralised, on those structures and forms of economic life which the central junta cannot directly control. As a result, this crypto ban could end up representing just one small feature of a much wider-ranging crackdown on human rights in Myanmar.