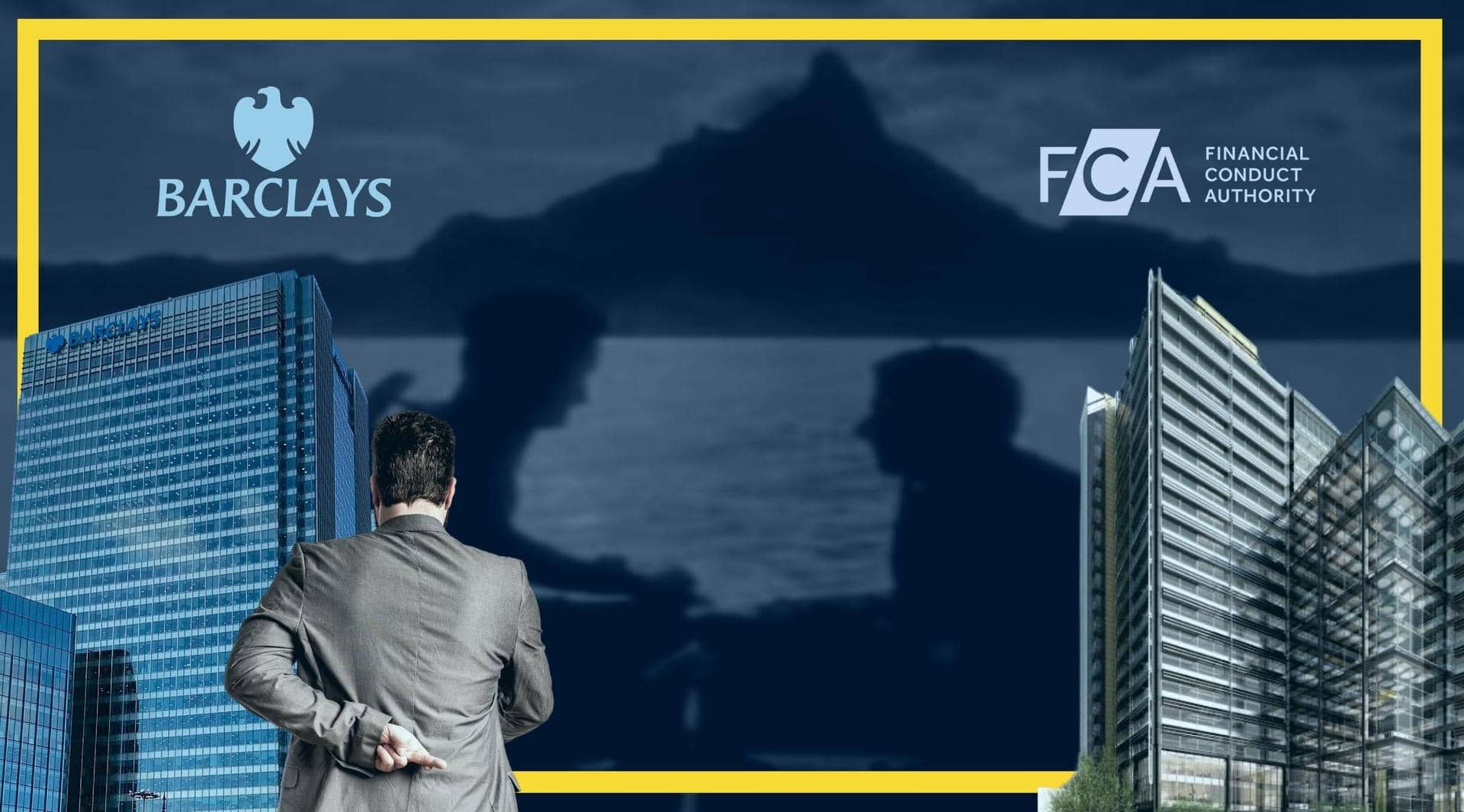 Having banked with Barclays since first arriving on campus back in the mid-90s, the bank has always been of particular interest to me. Not only did they sponsor the Premier League in England, but they also had catchy Barclaycard adverts featuring Mr Bean. Back then. Fast forward to 2021 and things are a bit more complicated. How much of the Ghislaine Maxwell trial affected the exit of previous CEO, Jes Staley, is hard to say. But today is all about the new CEO of Barclays. Coimbatore-Sundararajan “C. S.” Venkatakrishnan, or ‘Ventak’.

It’s always nice to get a call from your bank, and over the Christmas period Barclays didn’t disappoint. One of their veteran banking advisors called me just last week to find out if there was ‘any more the bank could do for me’. As a seasoned financial journalist this type of dialogue is of particular interest. I responded to his request by explaining that I didn’t know much about the new CEO of Barclays. How it would have been useful for Barclays to send information to its customers about the change of leadership. Some information about who the new CEO was, etc…

As Barclays failed to give me the information I wanted. I thought I would cover the story instead. So that other customers of Barclays could be more informed.

It’s not the first time Barclays have faced uncomfortable questions from their customers either.

How Barclays avoided a bailout in 2008

Banks like Barclays have several important leadership roles within their organisation. One of the most important leadership roles at the bank during the 2008 financial crisis was held by Roger Jenkins. Jenkins was head of Barclays’ investment banking division and had a personal relationship with Qatar’s then prime minister Sheikh Hamad bin Jassim bin Jabr al-Thani. It was partially this relationship that led to a £4 billion investment from Qatar into the bank. An investment that helped the bank navigate the choppy waters of the financial crisis.

The investment came under scrutiny akin to that seen around the recent takeover of Newcastle United football club. Three executives from Barclays were involved in a criminal court case surrounding the Qatari investment into Barclays. All three of the former executives were acquitted at the Old Bailey in 2020. The case was touted as the most high-profile British case against senior bankers dating from the 2008 crisis.

None of the three executives affected could be considered for a future role as CEO of Barclays. So, Bob Diamond became the CEO of Barclays in September 2010 instead.

One must wonder, bearing in mind the press surrounding Bob Diamond. How much more controversy appointing Roger Jenkins as CEO would have brought.

In 2012 Diamond resigned following a heavy fine that Barclays suffered because of the LIBOR scandal. Antony Jenkins was subsequently appointed, and led the bank as CEO until 2015.

Epstein, Maxwell and the previous CEO of Barclays

The ‘discreet’ departure of long-term CEO Jes Staley in November 2021 came as somewhat of a surprise to both customers and the wider markets. Perhaps it wasn’t such a surprise to some though.

Mr Staley’s relationship with Epstein has been under the microscope since revelations about the financier’s sex trafficking came to light. Whilst he was at JP Morgan, and against the best advice of the bank following Epstein’s guilty plea to solicitation of prostitution in 2008, Staley kept working with Epstein up to 2013.

Staley was ‘shell-shocked, angry and upset’ at the preliminary conclusion of an FCA report about his links to Epstein. He wanted to contest the findings. In the end, though, Staley quit his role with a healthy 12 month pay-off and pension allowance. Paving the way for the next CEO of Barclays.

While we may never know the full story of Epstein’s involvement in Staley’s career. It is apparent that a global systemically important bank needs to protect its reputation. And with Barclays, the scandals that have dogged the bank since the Qatar investment, have been ‘exhausting’. The risk of more stories hitting the headlines with Ghislaine Maxwell giving evidence in a New York courtroom was simply too high.

So the bank, again, needed to appoint a new CEO.

What do we know about ‘Venkat’, the new CEO at Barclays?

Following in the footsteps of Microsoft and Alphabet (Google), the new CEO of Barclays was born in India. Looking at how things have progressed for the two Tech Giants mentioned, there is every reason to be optimistic. Except for one thing. Neither Sundar Pichai, nor Satya Nadella have had the level of scandals or reputational damage to tackle that Barclays new CEO does. Bill Gates had a little fling with one of his employees at Microsoft, while Google have had a bit of a row with Australia. Other than that, the Tech Giants come in very low on the scandal radar recently.

CS Venkatakrishnan, also known as ‘Venkat’, has been with Barclays for less than 6 years. And apart from an updated LinkedIn profile and a few paragraphs on Barclays main page, there isn’t an awful lot of information about him out there. So Bloomberg remains one of the main places to go to find out more.

According to Barclays, their new CEO has been responsible for approximately $200 billion in global fixed income. He has been a Chief Risk Officer and he knows his way around global markets. There is not much more available from Barclays.

In 2016 Bloomberg covered a story about Venkat’s appointment as Chief Risk Officer at Barclays. Then CEO, Staley, released a statement at the time sharing how: “Venkatakrishnan has a long and well-established track record of helping to prudently define and manage risk appetite in large complex financial institutions. He has extensive experience in the development of regulatory capital models and with stress testing.”

Interestingly, just before news of Venkat’s appointment as CEO hit the market, Bloomberg reported some of his successes at JP Morgan. Using Venkat as an example of why investment banks should listen to their risk managers, the story explains how Venkat foresaw the potential for $6.3 billion of losses from a murky derivatives trade in London. Known by many as the legend of the London Whale. Bloomberg reported how a U.S. Senate investigation said that some losses at the bank would have been avoided if the Whale’s unit had heeded Venkat’s warning.

Venkat’s team at Barclays were singled out for praise by Staley in 2021. Staley praised them for putting processes in place that helped Barclays avoid getting involved with debacles like Archegos.

Will the new CEO of Barclays continue the work carried out by Jes Staley?

Initially it would appear that Venkat will be sticking to his predecessor’s strategy. On the topic of his manager, mentor and friend, Venkat issued a memo to staff, seen by Bloomberg News.

Staley “became chief executive of Barclays in one of our darkest hours, and devised and implemented a successful recovery strategy of outstanding vision,” Venkat recalled in the memo.

Indeed, the two bankers had worked together at JP Morgan previoulsy. Venkat continued by elaborating further in the memo about how “the strategy we have in place is the right one, and we will continue our existing plans to transform our organization and build on our financial prowess.”

However, that hasn’t stopped the new CEO from reshuffling some of the leadership roles at Barclays. Ashok Vaswani taking on the new role as chief digital strategy officer is just one of the changes. There are others in consumer banking and payments. Whilst, Paul Compton becomes sole global head of the corporate and investment bank. Stephen Dainton becomes co-head of global markets alongside Adeel Khan, who was recently global head of credit.

“We will work closely together on not only delivering an outstanding product and service set for our customers and clients, but in accelerating our growth and shareholder value,” Venkat said in a statement.

Barclays new CEO seems to be a ‘Safe Pair of Hands’ at the helm of the bank. His track record in banking is impressive. Barclays have always had charismatic and outgoing CEOs, which Venkat, on first glance, may struggle with. Supported by professionals including Vaswani may help to reshape the way the leadership of the bank is structured. But leaving their customers hanging for the best part of two months isn’t necessarily the best start to Venkat’s new role as CEO.

With 2021 earnings due on the 17th of February, there is plenty time for the new CEO to make up for the slack. He has a huge task to fill anyway. His annual statement may be the first time most people will be fully introduced to the new CEO at Barclays.

And with earnings come big bonuses. And Barclays, like most investment banks in 2021, have seen an increase in investment banking fees. The market doesn’t like these bonuses. Does the new CEO like them though?