From the CFTC to ‘CryptoDad’ 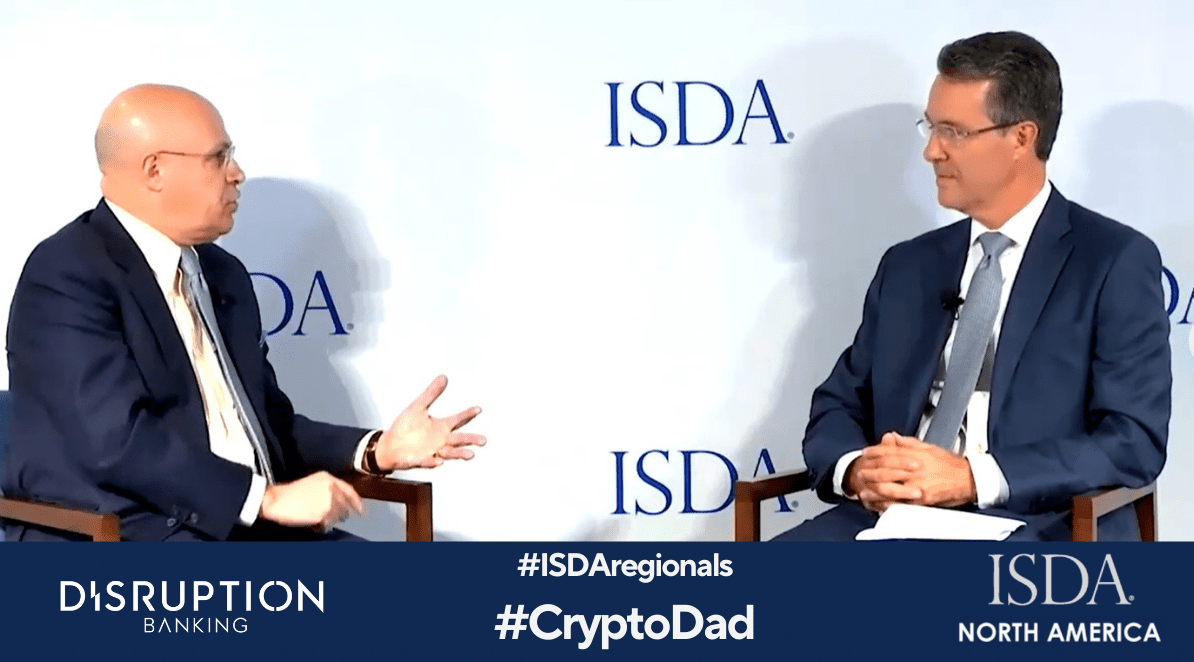 5 years ago at a conference like this week’s 2021 ISDA North America Conference, topics like High-Frequency Trading and the Dodd Frank Act would have headlined. This year, ‘CryptoDad’ was discussed in an interview between Scott O’Mallia, Chief Executive Officer of the International Swaps & Derivatives Association (ISDA) and J. Christopher Giancarlo, Senior Counsel, Wilkie Farr & Gallagher LLP and former Commodity Futures Trade Commission (CFTC) Chairman. The conference forms part of the ISDA Regional Events program.

The ISDA works to make the global derivatives markets safer and more efficient. However, with the first bitcoin ETF trading at record levels. Not to mention Central Bank Digital Currencies (CBDCs) headlining nearly every banking and fintech event across the globe. It was inevitable that crypto featured prominently at one of the biggest events for derivatives and capital markets participants in 2021.

Bitcoin ETF and CBDCs in the news

‘Bitcoin is now too big for Wall Street to ignore’ was just one of the headlines since the first Bitcoin ETF started trading last week. Elsewhere, Steve Hanke shared on Twitter how “Nigeria’s central bank has launched a digital currency, eNaira, just months after barring financial institutions from transacting in crypto”. Wherever one looks today, digital currencies are trending.

J. Christopher Giancarlo used to be the Chairman of the CFTC, an institution that has already looked thoroughly at the topic of digital assets. In fact, in April this year Dawn Stump, Commissioner of the CFTC, was a speaker at the Texas A&M Bitcoin Conference 2021 alongside industry leaders like Michael Saylor, Chairman and CEO of MicroStrategy, and Ray Dalio.

On the subject of bitcoin, Giancarlo’s new book ‘CryptoDad’, has a foreword from Cameron and Tyler Winklevoss. The same twins who predicted last October how bitcoin will eventually hit $500,000. Giancarlo himself is thoroughly involved in digital assets.

Giancarlo feels that his experience at the Commission (CFTC) gave him a glimpse into something that he thinks is a change that comes along only every few generations.

“And that is a real transformational change in the nature of money.”

Giancarlo explained that he was addressing the whole of the U.S. in his new book, and it was not just for those “folks in the Beltway.”

He wants to share with his readers “that money is changing right before our eyes. It’s changing fundamentally. And the decisions we make now are going to determine what that’s going to look like. Money is going to become less exclusive, much less expensive to move around.”

Pointing to how governments are now waking up to digital currencies, Giancarlo suggests that:  “the question is what the characteristics of money will be. And what will be the role of free societies, democratic societies. And what does that money look like in the future?”

Consensus model and the internet of value

In February 2018, Giancarlo gave a Written Testimony, as the Chairman of the CFTC, before the Senate Banking Committee. He highlighted the potential benefits of blockchain or distributed ledger technology (DLT) amongst other things. In June 2020 he gave Testimony to the U.S. Senate Committee on Banking, Housing and Urban Affairs. He presented the Digital Dollar Project and highlighted the benefits of public / private partnerships in technological innovation.

“Bitcoin in 12 years has never gone down. During that time, virtually every wire service, every payment system has had some outage.” Giancarlo explained. He suggested that one of the reasons the cryptocurrency has never gone down is the “consensus model” that the blockchain is based on.

“This is what now establishes the truth of who owns what, whose money is whose. This is the Internet of Value,” Giancarlo argued. “Because it’s that consensus model that’s almost computationally impossible to bring down. And so is the notion of blockchain, which a lot of cryptocurrency is built on.”

The success of CBDCs

Hinting at how the reaction of central banks to digital currencies is a testament to how powerful this technology is, Giancarlo explained how “data is the new digital gold, the most powerful, important commodity of the 21st century.”

He explained how central banks have seen the private sector entering into digital currencies and they have reacted. Pointing to China’s reaction to Alipay and WeChat, he shared how things are no different in the U.S. How U.S. politicians reacted to Facebook’s Libra and the information it would have given to ‘Big Tech’ had it been approved, is just one example he gave. Giancarlo believes that governments everywhere have an interest in who owns data.

Pointing out what Singapore, China, Canada and the UK are doing, and how they are seeing digital currencies as an opportunity to modernise their financial systems:

Giancarlo refers to this as “Infrastructure modernization”.

Another thing that central banks are attracted to is “financial inclusion”. He explained how sending paper cheques to people without bank accounts during the COVID crisis wasn’t terribly effective. “Precision monetary policy” would be the answer to this, he concluded. Something that would be much easier through digital currencies where mobile phones can be used for payments.

Referring to China again, Giancarlo explained how China “sees a digital currency as an operating system for a complete networked digital financial economy.”

Giancarlo thinks that China “sees the digital Yuan as the Microsoft Operating System to connect all of these financial services.

“You take the world’s fastest growing economy. Now take all the latency and cost out of going from one activity to another and that can send that economy into hyperspace…”

There are downsides to all this, with surveillance leading to potential rewards and punishment according to a social credit system, Giancarlo explained.

He also shared how “money is too important to be left to the central bankers.” Giancarlo wants the private sectors voice to be heard. Much like how the digital dollar foundation and the digital dollar project currently work with Accenture.

During O’Mallia’s tenure as CEO, ISDA has been a key institution working with banks and financial services companies to develop definitions and work through legal agreements. O’Mallia shared how questions about settlements and valuations were raised by some members of the ISDA. How crypto assets trade 24/7. “What time do you take that price, that settlement to mark your book?”

O’Mallia suggested a ‘robust’ conversation with both traditional finance and the crypto community to develop definitions of crypto assets.

Giancarlo agreed enthusiastically, sharing how he believed what the ISDA are doing “is the same work that has made the United States financial markets the envy of the world.”

“Our derivatives markets, our futures markets are the envy of the world. Self-regulation works in the American context. And the proof is that our markets are the world’s best, deepest and most liquid.” Giancarlo commented.

However, Giancalro thinks what is also needed right now is “Congress to direct public policy, authorise self-regulation. And then organisations like ISDA to get in the trenches, do the hard work of working through these details. Working with the parties that are engaged on a daily basis with these transactions, so they can be right on the cutting edge of where the issues are.”

The next five years for financial services

O’Mallia concluded the interview by asking Giancarlo what the next five years might look like. Giancarlo thinks crypto will continue to play an enormous role.

“Look at what happened within the last few days with the launch of the bitcoin ETF. Completely oversubscribed with 1.4 billion on it’s opening day. An extraordinary amount of demand for that instrument.”

Giancarlo thinks that society is enthusiastic about crypto. One front office trader told him recently that bitcoin has this “Goldilocks effect on days when the market is in a bull rush, it looks like Tesla. On days when the markets in bear conditions, it trades like gold, as a hedge against inflation.”

This will drive a lot, Giancarlo said.

Giancarlo also believes that central banks should learn from stablecoins. But, he thinks “the regulatory response right now is a little disappointing.”

And finally, Giancarlo told O’Mallia how: “If we get this right, it’s an enormous opportunity to bring more people into our financial system. Have greater financial inclusion. To lower the cost. To speed the movement of money around the globe. We go to a 24/7 financial system. And, to use digital money as an operating system for a fully networked global economy that would actually drive our economy forward at a much faster rate. Creating jobs, creating opportunities, creating wealth.”

Bringing it back to what needs to be done, Giancarlo stated how “we need to be prudent.”

“But, we also need to look at where the opportunities are, and I think there are tremendous opportunities in this.” Giancarlo concluded.

Valkyrie, the second to market with a futures-based bitcoin fund, this Tuesday filed an application with the U.S. Securities and Exchange Commission to launch the Valkyrie XBTO Levered BTC Futures ETF. Bloomberg reported how the fund would ‘juice’ returns by delivering 1.25 times the reference price of bitcoin.

Perhaps Giancarlo is not underestimating how enthusiastic society is about crypto.

One just needs to address the confusion. Be that definitions of crypto assets or how to self-regulate new assets and markets. Confusion that the ISDA are working hard to address.