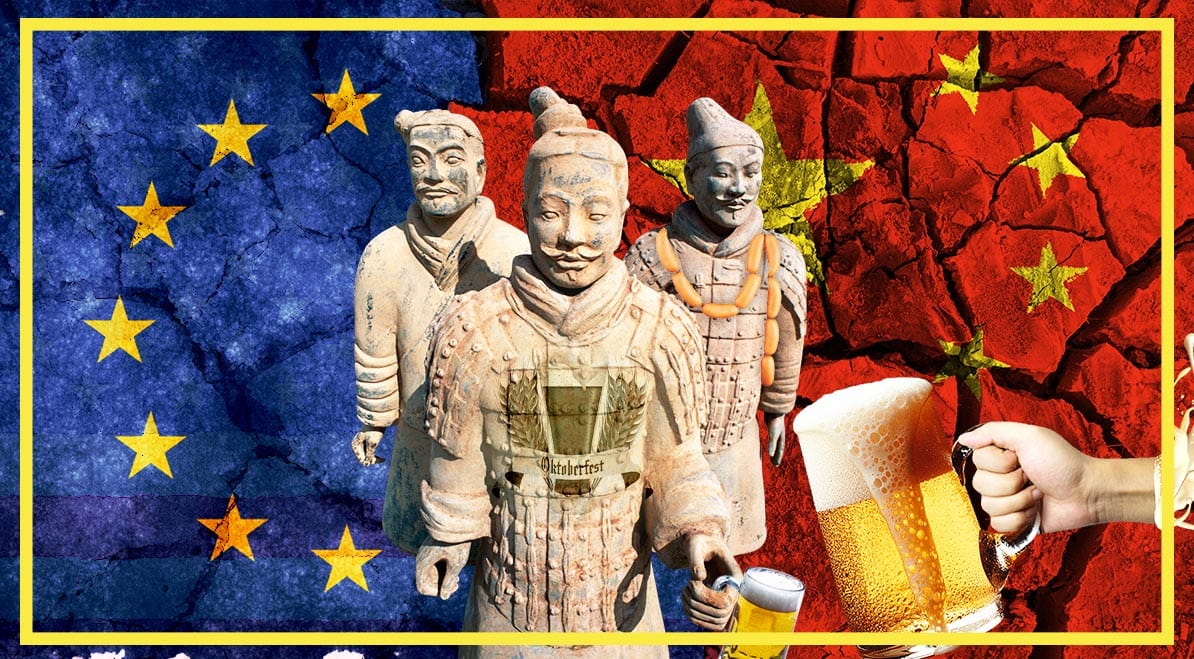 In three months’ time, China’s formidable president Xi Jinping was due to travel to the German city of Leipzig for a summit hosted by Angela Merkel and including the 26th other EU member state leaders. But September’s summit – a showpiece event as part of Germany’s upcoming EU presidency – is off, with coronavirus officially to blame, potentially replaced by a video-conference.

Bratwursts and bier via Zoom? The summit was (or is) significant. Relations with China are foreign policy priority of Germany’s six-month stint at the helm of the EU club. China, too, has also called for the strengthening of ties post-coronavirus

But Sino-European affairs remain decidedly tricky to unpick: the Economist last week referred to the EU as having treated the country as a ‘geopolitical chimera’; a lively discussion entitled ‘How to deal with China? EU divided over Belt and Road initiative’ has aired on France24 – the title refers to China’s high-profile international investment strategy (featured by #DisruptionBanking earlier this month); and analysis after analysis highlights the challenges facing China-EU relations.

Long-running negotiations towards an ‘EU-China Comprehensive Agreement on Investment’ rumble on: the 29th round of talks took place (by video-conference) three weeks ago, with the 30th round scheduled for 29 June-3 July. The EU wants to create investment opportunities for European companies ‘by opening China’s market and eliminating discriminatory laws and practices that prevent them from competing in the Chinese market on an equal basis with Chinese companies and companies from other third countries’.

There are also political dynamics to take into account outside the EU’s aegis but still within Europe: an initiative called ‘17+1’ promotes investment relations between China and 17 countries of central, eastern and southern Europe. Non-EU member state Serbia is among the countries emerging as a hotspot for Chinese investment (the country’s China links were also explored in a recent #DisruptionChat).

Fraser Cameron is a former EU civil servant and now director of the EU-Asia Centre think-tank. “The EU is taking a more robust approach towards China with the emphasis on reciprocity,” he tells #DisruptionBanking. “The proof of China’s seriousness will be shown if there is a good deal on the investment agreement negotiations, which are scheduled to conclude later this year. Meanwhile EU governments will be scrutinising Chinese investments in sensitive sectors including banking and technology.”

So where do Europe and China’s banks fit amid this geo-political jigsaw?
Chinese institutions continue to dominate the world’s banking power tables, according to Global Bank Ranking data published by S&P Global Market Intelligence a couple of months ago. China’s ‘Big Four’ — Industrial & Commercial Bank of China (ICBC), China Construction Bank, Agricultural Bank of China and Bank of China — are the world’s four largest banks.
But in contrast to their domestic (and indeed global) dominance – and in contrast to the scrutiny devoted to, say, technology giant Huawei’s global exploits – Chinese banks’ presence in Europe is relatively low profile. “In terms of Chinese banks’ visibility in Europe, it is mainly the Bank of China and the ICBC and their focus tends to be on companies involved in EU-China trade,” observes Cameron.

The broad picture, though, is that Chinese banks’ influence in Europe is growing, with tiny Luxembourg becoming something of a Chinese banking hub – or, at least, an entry point into the EU market for Chinese financial firms. Other bank-specific developments in recent years include Haitong Securities snaffling up Portuguese bank Banco Espírito Santo’s investment banking unit and ugly headlines for ICBC’s operations in Spain.

Alicia Garcia-Herrero, senior fellow at the think-tank Bruegel, is among the authors of ‘EU-China Trade and Investment Relations in Challenging Times’, a 78-page report published earlier this month.
“Chinese banks are now in Europe – you may not see them, but they are here,” Garcia-Herrero tells #DisruptionBanking. “They tend to mainly deal with Chinese [corporate and personal] customers. But it’s lower profile than, say, Chinese investments in European infrastructure.”

But some see red flags. “They have enough capital [from China] and reserves to experiment – it’s potentially very dangerous for European banks in as far as they don’t compete on an equal footing,” says Garcia-Herrero. “In fact, Chinese banks present in Europe are state-owned and they can lend on cheaper terms and take more risk without the same worries stemming from shareholders’ reaction.”

As to how the coronavirus pandemic affects the situation for banks, Garcia-Herrero says: “To keep the economy alive and to avoid a credit crunch out of banks’ increasing risk aversion, it could be much easier for Chinese banks’ and especially fintech to compete in the consumer lending space. This could be risky in terms of financial stability especially if such consumer lending comes from unregulated entities and creates excessive household lending for households who might not be able to repay their loans.”

Penetration of the Chinese market by European banks is a somewhat different kettle of fish. ‘Europe is open, China is not’, an anonymous EU diplomat said in last week’s Economist article. “For European banks, entering China and competing there, is just too costly in terms of the capital needed,” says Garcia-Herrero.

With an eye on the EU-China trade-talk rounds, Cameron makes a related point: “China is still keen to move ahead with the internationalisation of the renminbi [Chinese currency] and needs European financial markets, especially London (now outside the EU) and Frankfurt (within the EU), to support the RMB’s internationalisation. But China’s imposition of capital controls means this will be a longer- term project.”

In terms of Beijing’s official line to Brussels, China’s ambassador to the EU Zhang Ming said only last month that the country ‘will not stall its efforts to deepen reform and expand opening-up’.

The EU is warm to such words. The hope will be that the Leipzig summit’s curtailment is just a bump in the (Belt and) Road. Political potholes lurk around every bend.

“I want to be optimistic about EU-China relations because the USA seems to care less about Europe. Europe will need to work closely with China – it’s still on the path to reform, and its market will only grow,” says Lannoo.