Banking on a #Brexit Deal 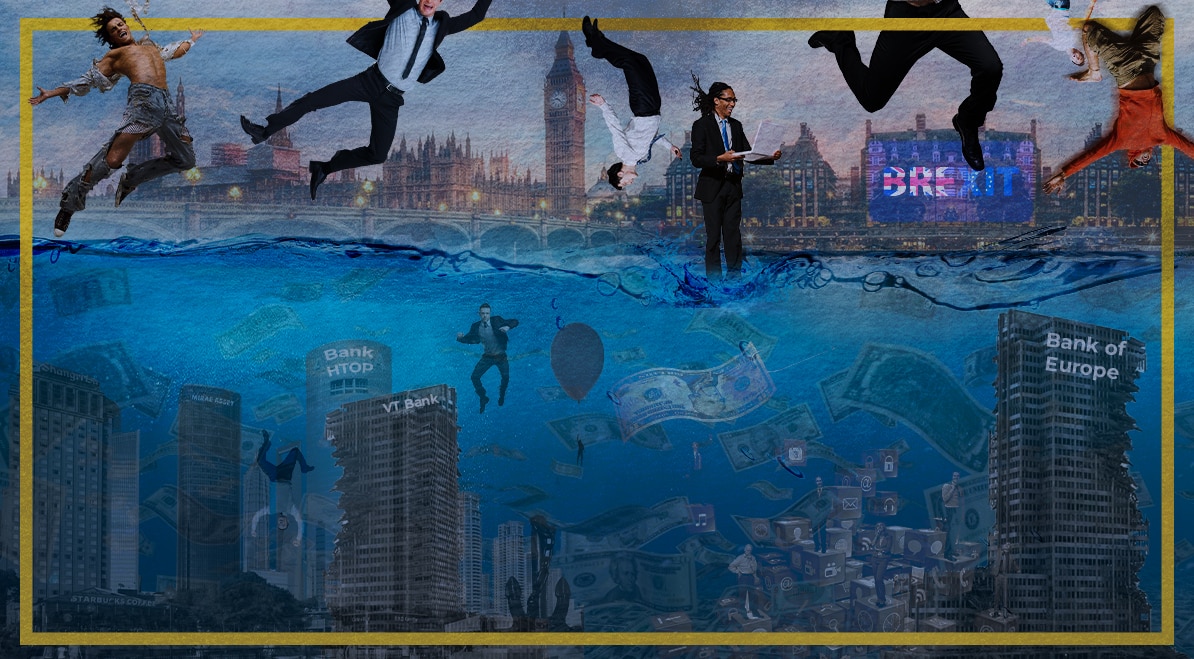 There was a period – a long period – a few years back when banks were very, very agitated about the possibility of Britain leaving the European Union (EU). Like many industries, they really didn’t want Brexit to happen. But they generally didn’t say so publicly, and when they did it tended to be politely or obliquely. Behind the scenes their mood oscillated between bewildered and irritated to (for some) steaming mad. A vote for Leave could threaten the gleaming cityscape and London’s undisputed status as Europe’s financial capital.

Then the 52% had their say. Three-and-a-half years after the referendum, with acquiescence having apparently displaced alarm, Britain (finally) left the EU on 31 January 2020.

Since then, relative quiet on the Brexit front (quite understandably in recent weeks, with coronavirus raging). But the negotiations – led by the EU’s Michel Barnier and his UK counterpart David Frost – that aim to decide the future relationship sparked back into public view last week. Bank of England governor Andrew Bailey was reported to have advised bank bosses to accelerate planning for the transition period to end without a deal.

So, where are banks now, as far as Brexit is concerned?

The most direct punch on the UK’s solar plexus has already been delivered, coming just over a year ago when the European Banking Authority closed its Canary Wharf office and relocated to Paris. But that was a one-hit thwack as opposed to the drip-drip-drip shadow boxing of the future relationship talks.

Iain Anderson, executive chairman of London-headquartered public policy consultancy Cicero/AMO, observes that financial services have in recent months “remained largely in the background as a bargaining chip while issues such as fishing get prominence”.

Anderson, who authored the book ‘F**k Business’ (named after what Boris Johnson was reported to have said when asked about businesses’ concerns over a ‘hard’ Brexit two years ago), tells #DisruptionBanking that banks had “mainly” prepared for the first Brexit deadline of 29 March 2019. “So, the reality is that they have been largely ready for more than a year,” he says.
This readiness has involved the relocation of business, staff, assets and/or legal entities away from Britain to EU. According to a widely-quoted report from New Financial last October, more than 330 firms had or were in the process of doing so (and the think-tank warned that the number was likely to increase). The report found Dublin by far the biggest beneficiary with 115 relocations, well ahead of Luxembourg on 71, Paris on 69, Frankfurt on 45 and Amsterdam on 40. These findings likely understated the situation as many firms will have moved functions ‘below the radar’, while others continued to await greater clarity, New Financial said.

Professional services firm EY picked up on the same theme in January, saying that financial services companies had “gone quiet on relocation announcements as focus [this year] moves to securing a strong future trading relationship”.

Logically, financial services lobby group TheCityUK is seeking to strengthen its relationships with territories beyond the EU, for example Switzerland. But its member companies can largely only watch on as Barnier and Frost negotiate, apparently stuck in a large vat of treacle.

Global politics, and global health pandemics, wait for no-one, though (quite personally, too: both Barnier and Frost were themselves put out of action through coronavirus back in March).

“What has shifted in the past three or four months [as regards Brexit] is that there is a more intense focus on what trade agreements look like more generally. And the broader context has also changed – it seems a more protectionist world and a more China-sceptical world,” says Anderson.
Prof Sarah Hall of the ‘UK in a Changing Europe’ research initiative is the lead author of ‘Services and Brexit’, a report published last week (financial services focus on pp16-19).

Hall says: “The EU has been clear that the UK cannot ‘cherry pick’ aspects of EU membership and that financial services cannot have special treatment.”
Challenges include determining a new ‘equivalence’ regime – effectively, a successor framework (or agreements) to the intra-EU passporting rights that the UK has held until now, albeit one that would mean more precarious market access for UK financial services (to see in summary form what the City wants, see this International Regulatory Strategy Group’s two-page briefing published in mid-February).

On 27 February the UK government published its draft UK-EU Comprehensive Free Trade Agreement (CFTA) – 292 pages in total.
Hall picks out a detail on p159 as potentially significant: “What is being defined as a ‘financial services provider’ in the negotiations is interesting. The UK is seeking to include individuals or businesses who already provide financial services alongside those who ‘wish to’. This points to efforts to future-proof the outcome so that it can apply to new forms of financial services, such as fintech that London has an international reputation for.”
As far as equivalence is concerned, a more recent UK government document published in May says simply that ‘the UK and EU have committed to carrying out unilateral equivalence assessments for financial services, distinct from the CFTA. The fact that the UK leaves the EU with the same rules provides a strong basis for concluding comprehensive equivalence assessments before the end of June 2020.’

Of course, the City is not a homogeneous mass: different players want different things. Institutional investors and hedge-fund managers see reduced European regulatory oversight and regulatory divergence as an opportunity to increase competitiveness, as the ‘Services and Brexit’ paper points out.

Uncertainties also spill over into all sorts of other areas. “Right now the big concerns are data sharing and cross-border contract continuity,” says Anderson.

Elements of the British media continue to revel in painting the EU as an enemy – in the same way they did during the UK’s 47-year membership of the bloc.

But Anderson makes the point that Barnier understands the importance to Europe as a whole of London’s global significance. “There are two gigantic capital-raising markets – London and New York,” he says. Significantly weakening and dispersing that power could be counterproductive.

Hall agrees, and points out that as economies seek to rebuild after coronavirus, access to finance will increase in prominence – and London’s capital markets might be helpful to the EU when the transition period ends.
So, what next? Further talks are due in the coming weeks between Boris Johnson and European Commission President Ursula von der Leyen. The BBC’s Katya Adler made the point last week that Germany takes over the EU Council presidency on from 1 July, a development likely to shift the negotiating dial during the second half of the year.

Given the apparent lack of progress (and coronavirus’s impact), some have asked whether the Brexit transition period will be extended. But Downing Street is against this – its most influential occupants want to Get Brexit Done.

Last-ditch breakthroughs have always been par for the course in Brussels.
“I think we’ll get a skinny, limited deal by the end of the year and the long-term relationship will be negotiated in a long-term way,” says Anderson.
Like other sectors, banks have their contingency plans in place for different outcomes. They will ramp them up, or scale them back, depending on how the next chapters in the Brexit story play out.

Read More on Brexit:
#DisruptionBanking covered Brexit back in February, but we don’t like to oppress our readers too much with this content. However, please have a look at how things have developed since February: