The Green and Blue King, HSBC, and a possible $100T loss 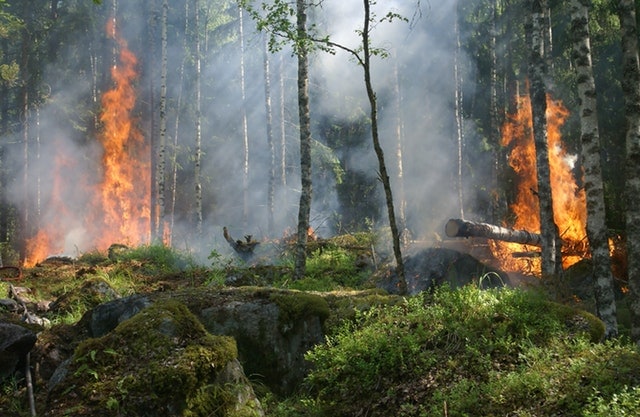 As popular ‘planet-conscious’ movements take hold over the globe, with particular reference to Greta Thunberg, and the disruptive organization Extinction Rebellion, which has regularly put the London transport and legal system under pressure in an effort to achieve its aims, politicians have been forced to sit up and take note. This has led to nation states officially recognizing a ‘climate emergency’. Thus, government policies are moving to counter the growing threat of climate change on the planet, gradually. But without the private sector we stand little chance of countering the growing concern facing us all.

Troubling issues such as deforestation, desertification and mass climate migration are going to create headaches. The outcry of climate disasters can touch many, such as the (continued) burning of the Amazonian rainforest which set off a media, social and political firestorm (forgive the pun) as one of the ‘lungs of the earth’ was on fire. This comes on top of rising sea levels (typically major cities are based close to the sea or wide rivers and lakes) which would threaten to displace even more people and require a significant amount of expenditure. Whether or not climate change / global warming is caused by people (97% of scientists believe this is the case according to NASA), what is certain is that the 7.7 billion people on the planet do have the ability to terraform. We can see this in large metropolises such as London, Tokyo and China’s Greater Bay Area (GBA). Some cities are being forced to relocate key assets away now. Taking a look at Indonesia for instance we can see that the capital city of Jakarta is sinking by an extortionate amount per year, and Indonesia is being forced to find a new capital.

As the planet warms up, there may be more food and water shortages, which in turn would lead countries to fight each other just to retain resources. This is a large shift in history as it has typically been the case that countries have fought each other to take control of resources (which some still do if one were to read between the lines of Donald Trump’s direction of “what I intend to do, perhaps, is make a deal with an ExxonMobil or one of our great companies to go in there and do it properly” – in reference to an oil field in Syria).

The statistics vary, but between 100 million and even up to 1.5 billion people are expected to be migrating by 2050 as a direct result of rapid climate change. The sources that the numbers above come from are quite reputable. For instance, the International Organization for Migration projects that between 25 million and 1.5 billion people will have to leave their homes by 2050, with the World Bank putting the figure at 140 million people.

“We will experience the cost of climate change in the future, all these illnesses that we suffer today will be different than those we suffer in a decade. Warsaw is named one of the top ten polluted cities in the world and imagine that 4 million people have to inhale that air, the country will suffer higher medical costs” –said an Ex Senior Consultant at Deliotte and PwC. Poland is a case study because the country is mostly powered by coal, leading climate activists to sue Europe’s largest coal mine which produces more emissions than New Zealand. Issues like this have been reported for a long time, as an example one could look at the 14,000 people that died in London 1952 December 5th to 9th owing to strong smog over the city.

As climate change also leads to more extreme weather, we could look at individual shock weather case studies to establish the financial burden. The cost of Hurricane Sandy was $35 Billion, with Katrina costing $100 Billion, not to mention all the lives lost. At a 5.5% of Global Temperature Change, that would come at a cost of 10%, with Climate Damages as a % of the Global Economy. One way to limit the damage could be in putting a ‘carbon price’ on polluters, Robert Litterman, a risk management expert who used to work in Goldman Sachs claims that procrastinating on a carbon price could put a price tag of $100 Trillion on climate damage costs. Although 40 countries around the world have implemented some form of a carbon price, the consensus is that they are too low to be effective.

Even FinTech can have a significant cost to the planet, if we were to look at the Bitcoin and Cryptocurrency computing power, which according to one source produces as much carbon emissions as more than two Missouri’s. The use of Bitcoin — a popular virtual currency — emits over 22 megatonnes of carbon dioxide annually, comparable to the total emissions of cities such as Las Vegas and Vienna, a study has found. However, Green FinTech is fighting back, Revolut for instance offers it’s customers the ability to donate to the World Wildlife Fund and at the height of the Amazonian rainforest fires called on its consumer base to donate to Save the Amazon.

But what are the gatekeepers of cash (the big banks with trillions), actually doing to fight bank? Groups of Financial Institutions have come together in various forms, such as the Sustainable Banking Network, a 38 member-country organization representing $43 Trillion (or 86%) of the total banking assets in emerging markets. But the significantly more reported on initiative is the Principles for Responsible Banking, launched by 130 banks from 49 countries, representing more than $47 Trillion in assets. That was recently launched officially on the 22nd and 23rd of September 2019 at the United Nations General Assembly in New York.

But HSBC is clearly taking the cake in this regard. HSBC is the leading green bond issuer on the planet and was named ‘The Best Bank in Sustainable Issues in 2019’. Green finance is the promotion of projects with a focus on the sustainability of the project and the balance it can strike between people and planet.

HSBC ‘World’s Best Bank for Sustainable Finance’ was awarded in recognition of its work to support the global transition to a low-carbon economy. HSBC’s strength in green bonds helped it stand out in the sustainable finance category, according to Euromoney. The bank has supported recent bond launches in locations including Hong Kong, Ireland and Mexico. The publication also pointed to HSBC’s role in the development of the green loan market, and its work on sustainable supply chain financing, as evidence of its progress in “getting capital working for the planet”.

The market in green and blue bonds (those that focus on aqua sustainability) has been growing at an astronomical rate. The first half of 2019 saw $86 Billion issued, a rise of 26% on a year earlier, according to data from Refinitiv. France is the most active issuer nation (most green bonds are issued by nations), which accounted for 13.4% of the grand total. The Asia Pacific claims a 22% market share in green bonds with Japan seeing the highest growth in issuance, at 73% growth YoY.

HSBC is currently seeking to scale the green bind market using emerging technology such as FinTech, and has co-authored a report with the Sustainable Digital Finance Alliance into use cases.

HSBC is clearly a bank looking to make an impact. “With an estimated USD90 trillion of infrastructure investment expected by 2030, working together now will enable market participants to price climate risk and effectively allocate capital to deliver a low-carbon future,” said HSBC Group Chief Executive Noel Quinn. “At HSBC, we have committed to providing USD100 billion of sustainable finance by 2025. To date, we have put USD36.7 billion to work and recognize there is much more to be done.”

Views expressed above are those of the author and do not necessarily represent those of DisruptionBanking.